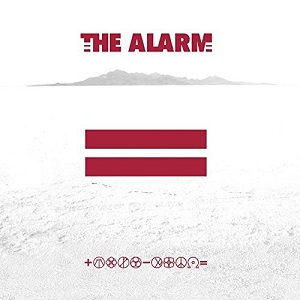 
I have to say that on an initial listen I really struggled with this album, the first from The Alarm in eight years. If all you expect from them is big guitars, mock-heroic 'oh-oh-oooh-ooh' choruses, slightly clumsy lyrics and the sense you've heard it all before in 1981, then knock yourself out because that's all here.

But there's more, much more besides…

Conceived in the wake of songwriter Mike Peters leukaemia relapse in 2015, followed by his wife Jules' breast cancer diagnosis - both are now in remission - Equals is the sound of a band with a renewed sense of urgency.

Clearly, Peters is fully aware of his constituency and happy to deliver what it wants, but also confidant and trusting enough to push the envelope. Thus, opening cut Two Rivers doesn't announce itself with a power chord blast and rousing singalong but with a sequenced synth pulse and four-on-the-floor proto-disco rhythm courtesy of Jules Peters' keyboard stack. She's also given the box seat on Thirteen Dead Reindeer and the closing track Tomorrow, where her unfussy approach adds depth and texture to her husband's sometimes bombastic songwriting.

I don't suppose anyone is looking for a hit single, but helped along by a big-hearted, open-armed chorus Beautiful out-Bonos U2 with passion to spare and is a genuine contender. Yes, really.

The very fact it exists at all means this record is about playing the hand fate deals and surviving. It's a testament to its creators' indomitable spirit and sheer sincerity - admirable qualities routinely attributed to their countrymen Manic Street Preachers - and warrants as much attention as it can muster.