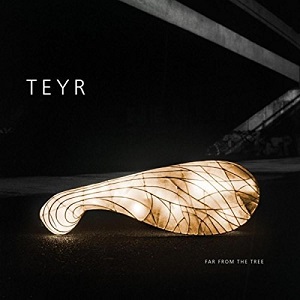 
Teyr (the feminine form of the Cornish word for the number three) is the name adopted by a trio of young (non-female) musicians - James Gavin, Dominic Henderson and Tommie Black-Roff - who take an imaginative approach to the playing of tunes and songs from the heritage of Ireland, Scotland, England and yes, Cornwall too. By all accounts, the band grew out of the North London session scene, and there's certainly the organic creative feel of the close-knit session about the tight-but-freewheeling way in which the guys approach their music-making, flying with the wind - and the winds of change - and arguably with something of the innovatory spirit of Lau.

One curious - and obvious - omission from the copious information on digipack and booklet is a statement of who plays what. I shouldn't need to tell you that the three musicians have absolutely no need for anonymity, for their accomplishment is as emotionally stunning as it is flawless in execution. Their instrumental blend is distinctive, and nowhere near as constricted as it might appear on paper. Opening set Reeds And Fipple pairs a jig by Dominic with The Wounded Hussar, a lament in the form of a slow air learnt from Lúnasa's Cillian Vallely - and turns our expectations on the head by taking the tunes in that order. Dominic's prowess on the uilleann pipes is matchless, with a commanding tone and phrasing that makes Tommie's piano accordion a natural foil (and ideal sparring partner when it comes to the central duet section), while James's guitar drives a solid pace from the start. That opening set is a hard act to follow, but the first of the disc's five songs brings a fresh new melody to the emigration forebitter Banks Of The Newfoundland. A common feature of all five songs is the strength and idiomatic conviction of the singing, with leads shared between two of the trio members, although it's also a big plus that Teyr choose carefully when it comes to the melodies for familiar ballads like Huntley Town and False Lady. Two of the songs were previously unknown to me - Stephen Muldoon's delicately philosophical poem Nothing Grows, and a group setting of Yeats' Hosting Of The Sidhe - but rest assured, they're destined to be oft played hereabouts…

The various tune-sets mostly utilise original compositions by trio members, with a couple of traditional items and one by Brian Finnegan (Hayden's Rock) thrown in for good measure; closing item, Dean's Banjo, may have been composed by James on said instrument, but it enjoys a series of quirky adventures on the guitar before being handed around the ensemble. All of the tune-sets exhibit a dazzling exuberance that combines unpretentious fiery showmanship with an equally unpretentious musicality, and the result is always irresistible, engendering none of the "so what?" reaction that often comes when hearing a group of young musicians who are used to playing for each other at communal sessions. So pronounced is Teyr's togetherness and inclusivity that it's hard to single out any specifics, but the playing as a whole mirrors the enterprising distillation of regional influences that makes the Teyr blend unique. I could lay a firm spotlight on Dominic's incredible proficiency, not only on the pipes but also on whistles, which feature strong on a good number of the album's selections. I could also make more than passing mention of James's well-appointed fiddle playing, which is under-represented generally on the album, I feel.

Far From The Tree is an album with a colourful, rich soundscape, where the faultless internal balance of the musicianship is expertly conveyed in a highly percipient studio production by Gerry Diver that brings out the nuances of the individual instruments with a flair for texture that rides aloft with the playing. Borne aloft, the music may be taken far from its tree roots, but it thrives and flourishes. We'll be hearing much more of Teyr, I feel sure.