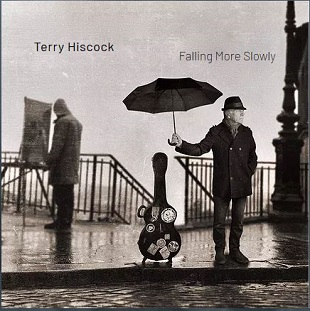 
I think I've lost count of the number of times that I've been disappointed when a member of a group whose music I enjoy takes to releasing a solo album which fails to impress. This is emphatically not the case with the latest release from Terry Hiscock, founding member of the quite excellent and legendary Hunter Muskett. Falling More Slowly, his first solo project outside of the group, is a musical tour-de-force on a par with any singer/songwriter oeuvre currently being created on either side of the Atlantic.

Of the 12 songs on this release, ten are newly written by Terry; each one is a gem and all are distinguished by their extraordinarily compelling lyricism and melody. With subjects ranging from Delta blues player Robert Johnson, to songs of love and melancholic loss, and even the Shipping Forecast, from which the album title is derived, each track features vocals and acoustic guitar with mandola, double bass and electric slide arrangements, all performed by Terry, with the occasional guest contribution.

An interesting, indeed novel, added bonus are the short instrumental introductions preceding each substantive track. Consisting of mostly traditional tunes which relate in some way to the song which follows, deciphering the intended connections should keep the listener busy too, but don't expect a track 14!

Having seen, and thoroughly savoured, Terry perform many of the tracks live, as both a solo performer with acoustic guitar and harmonica, or in a duo with enthusiastic supporter and band-mate Roger Trevitt, I have to admit to being awestruck by how much the additional instrumentation has enhanced the depth and quality of each song. The CD also benefits greatly from its high-quality sonic values. Produced by Terry and John Ellis, who also recorded, mixed and mastered the album at Limehouse Studios, Manchester, crystal clear lyrics are forward and razor sharp instrumentation spacious. Close your eyes and it seems as if the music is being played live in your room. (Wishful thinking on my part maybe, but you get the point.)

Opening track, from here to Rosedale, (all titles appear in lower-case), is a song about Robert Leroy Johnson, troubled King Of The Delta Blues. Immortalized in Johnson's 1937 recording Traveling Riverside Blues, although the 1936 Cross Road Blues song did not mention Rosedale, the town has since become associated with the legend of a bluesman selling his soul to the devil at the crossroads. Terry's homage is delightfully melodic, the first-class finger-picking and perfectly understated slide creating a perfect sound-scape to accompany emotive lyrics such as

'nobody saw him, everybody passed him by
but when leroy sang the blues the whole world cried'

By contrast, Terry suggests an antidote to the blues, or indeed any occasion when the world seems to be against you can be found in good company. With main lyrics delivered in a spoken style accompanied sublime electric slide and choir-like backing vocals, many listeners, even if not musicians themselves, should be able to identify with the security and solace to be found in being able to walk in good company

I'm pretty certain that the gentle, lilting you can't always tell has been recently performed live by Hunter Muskett. Here, a harmonica introduces what are new words to an old tune, whilst next track, dave's song is also one that had laid dormant in the bottom of the guitar case. Suitably dusted-off, it is brought to life by the angelic voice of Gayna Taylor. A beautiful track indeed.

by the light sees a change of tempo and mood, in what Terry claims is a first for him, a jaunty combination of Fats Waller and Leroy Carr, (who like Johnson died way too young). Neither pastiche nor a cheesy derivative, this crooning/country/bluesy number, again featuring superb finger-picking is underscored by some fine fiddle playing from the talented Tom Leary, whose contributions enhance many tracks on the release.

As Terry quite rightly says of title track, falling more slowly, for non-fisherfolk everywhere, the shipping forecast reads like a radio ballad. Written from the perspective of a seafarer 'working out of humber & tyne' , the harsh life and inherent dangers are made clear in this tender paean to these brave workers.

There is another change of tempo as Terry delivers a fabulous version of the African/American gospel call-and-response classic jesus on the main mine, the earliest known recordings of which were made in 1937, and a version of which, performed Mississippi Fred McDowell, was subsequently collected by Alan Lomax.

A little kindness now might just be one of the most melancholic, but nonetheless sensitive, songs that you will hear, with the electric slide creating the aural equivalent of tears, over Terry's mournful lyrics. By contrast his version of Hoffman, Livingston & Drake's upbeat, ragtime-tinged and humorous she broke my heart in three places, a firm favourite when played at live shows, lightens the mood before one of these days, a song written after a visit to Alcatraz prison, and featuring the dusky vocals of Essex-based Noel Gander, gives a sense of hope and optimism

Readers may be aware of the traditional halyard, Roll Alabama Roll, recorded by the likes of Swan Arcade, Cyril Tawney, Jon Boden and, more recently Bellowhead, recounting the story of the Confederate sloop-of-war CSS Alabama, built by William and John Laird & Co. in Birkenhead, United Kingdom, in 1862. Serving as a commerce raider, attacking Union merchant and naval ships over the course of her two-year career, she was sunk on June 19, 1864 off the coast of Cherbourg by USS Kearsarge. The lyrics of this shanty are attributed to the Confederate sailor Frank Townsend who served on the ship and tell the "official" story. On the penultimate song on this album however, alabama '64, Terry's story is one of romance and intrigue

The closing song, where are you now (sweet marie) also references Alabama, but on this occasion takes the listener back to era of the civil rights marches in Montgomery and Birmingham, protests against the Viet Nam war and, judging by the photo, Bob Dylan & Blonde On Blonde. 1966 personified. Those of us who were there will certainly always, always remember someone from those distant days, whilst those of a younger age should have no problem empathising, indeed given the current political climate, Terry's lyrics may be seen as equally prescient and relevant today

The whole Falling More Slowly package is an artistic delight. The accompanying booklet includes lyrics for each song, complete with evocative photos of places associated with the making of this debut album. Terry's website is also well-worth a visit.

Whilst "debut album" seems a strange phrase to use for an artist who has been creative since 1969, what is undeniable is the quality, class and sophisticated professionalism of the music. Falling More Slowly is an album of gems, to be treasured, and confirms Terry Hiscock as one of the best singer/songwriters around.