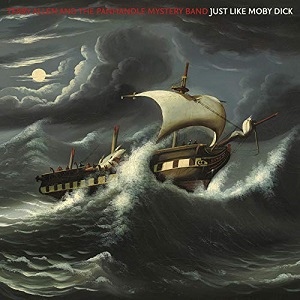 
It’s widely acknowledged that Terry’s 50+-year career has uniquely bridged the ostensibly disparate (and usually distant) worlds of s/s country music and conceptual art – and yet, as anyone familiar with his output will agree, these worlds are not as far apart as might be imagined, for even in the hallowed company of the most masterful of songwriters Terry stands out for his combination of vivid literate storytelling and imaginative vision. His obsessive preoccupation – the “mirages and ravages” of human memory, all its methods and effects – is every bit as much to the forefront on his latest record, Just Like Moby Dick (his first album of new songs since 2013’s Bottom Of The World) as it has been on the video installation and drawings comprising MemWars, the show which constituted the central focus of his 2019 retrospective exhibition.

Just Like Moby Dick is in terms of thematic preoccupation and type of subject matter a characteristic Terry Allen album. Its entirely apposite, delicately contoured but rich and varied musical backdrops come courtesy of the current full Panhandle Mystery Band, which includes in its lineup trusty Mystery Band veterans Richard Bowden (fiddle), Lloyd Maines (pedal steel) and Davis McLarty (drums), alongside Terry’s son Bukka (keyboards, accordion, piano), Glenn Fukunaga (bass) and Brian Standefer (cello), and Charlie Sexton (guitars), who’s co-produced the album with Terry. But there’s also an important departure from the norm on this album, in that for the first time Terry has allowed other folks to take on some of the lead vocal duties. Shannon McNally, a singer of considerable presence, does a great job on the melancholy All These Blues Go Walkin’ By and the slow Dixie crooning Harmony Two (the latter penned by Terry’s wife Jo Harvey) and All That’s Left Is Fare-Thee-Well (a duet with Charlie)

Just Like Moby Dick draws its title from the seminal Herman Melville novel that has long haunted the American imagination, but the album’s not concerned with a literal parallel, more a simile, a metaphorical analogy, for scenarios and memories. Seafaring per se doesn’t really figure, except on the oblique tale of “bad girl buccaneer” Pirate Jenny. But I guess that spiritually, the new album probably bears more of a kinship to Terry’s 1979 masterwork Lubbock (On Everything), with its depiction of all manner of tragi-comic disasters, abandonments and betrayals. Oftentimes Terry’s wild and picaresque stories portray figures of legend in unusual and often quite odd situations, like moments of existential crisis (Houdini Didn’t Like The Spiritualists) – and I’m sure I can’t be alone in finding common ground here with the method of other major storytellers-in-song such as Tom Pacheco, Reg Meuross and John Prine, the latter-named quite strongly recalled in particular on the beautiful, tender Death Of The Last Stripper (another number where Shannon shares vocal duties).

Elsewhere, there’s a sideways-step into satirical commentary and necessary protest with the three-part American Childhood that balances a child’s sing-song observation (Civil Defense) and apparent frippery (Little Puppet Thing) with brooding, savage condemnation (Bad Kiss). This triptych is complemented by a true one-off, City Of The Vampires, a deliciously carnivalesque rocky-horror portrait of a vampire-infested circus. These distinctive compositions are neatly counterpointed by a healthy quotient of more introspective material, like the barroom lament of All That’s Left Is Fare-Thee-Well, the loneliness-shuffle of the brittle, laconic Abandonitis, and the swinging closing slice of self-examination and positivism Sailin’ On Through, the chorus to which catchily exhorts us all to “break out the bottle, bring out the glass, and fill it up with the good stuff ’cause everything must pass”.

And so we come full circle to the album’s only mention of the titular white whale, and we’re reminded that throughout Terry’s storytelling are scattered insights such as “all good luck has death in it”, and “memory shoots her crystals as clear, white ice”. Couldn’t have put it all better myself. Oh, and I love the presentation and artwork too.

Death Of The Last Stripper