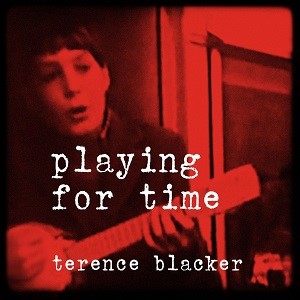 
Songwriter and performer Terence Blacker has taken a new direction with his music. Recording this set of twelve new songs in a studio in Southern Italy with a group of European musicians. PLAYING FOR TIME, the resulting album still has his jazzy acoustic guitar and wry observational songs, but it is infused with a light bright Café sparkle that was hinted at on ENOUGH ABOUT ME his 2018 album. "I Fool Myself" skips along like a contemporary "Aint Misbehaving". Like Robb Johnson, whose sophisticated folk blues delivery is similar to Terence's, there is a whiff of melancholy to his examination of Europe on "Europa Mein Amour", a wonderfully sunny and alcohol woozy goodbye.

As the cover hints, Blacker looks back fondly at his own youth, listening to exotic Pirate Radio, "Memories Are Company" just needs Stan Getz to sound like the spirit of 60s musical Braziliana, Giovanni Rago's sophisticated electric guitar solo and Hartmut Saam's accordion deliver instead. The uplifting tempo and percussion mean the looking back is wry and good humoured. Terence is a nimble fingerpicking guitarist and the playing on "Thank You My Team" his football song is fine and lively. He plays a sophisticated jazzy electric on "Forty Degrees", his languid vocal and guitar perfectly capturing hot afternoons with a sense of Leon Redbone sophistication, tailored jackets, and cocktails in the dappled shade. There is a wonderful tension between the folk club guitar, Terence's vocal delivery and the satirical story telling on "Fake News" and "Me Too as contemporary references collide with the ragtime blues of "The Glory Of Love", this is classic folk blues in the making.

The light spoken quality and the call and response word play over Giovanni Crescenzi's bass suggests an acoustic stripped back Paul Simon. "The Players And The Game" is another wonderful reflective song, delightful folk guitar and a poignant look back in a song that could have been written by Jackson C Frank or Martin Simpson. I can imagine this track particularly becoming a standard, covered and inhabited by others, so eternal is the sentiment. "Time Is A Hard-Ridden Pony" is a wonderful image and alive with the sense of a dark western theme written by Jake Thackray for Johnny Cash, a dark quality coming from Fortunata Monzo's wonderful vocal and Blacker's guitar flourishes.

"Saved By A Song" is another wry look back at a life lived, a Bert Jansch like guitar part and a reflective chorus that sums up the whole light bright and slightly melancholic album "saved by a song, turned by a tune, who's to say that they were dreaming" If this album had serving instructions they would be accompanies full bodied red or a chilled white, best enjoyed on a warm evening.

The Players And The Game