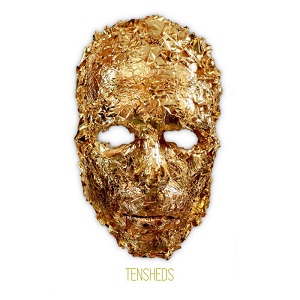 Exploring a theme of being prisoners of love and loss, it opens with 'Youngbloods' ("always the first to die"), Wells spitting out a thumping staccato drum beat interspersed with shimmering organ waves and trills over which the rough grain gravelly vocals call to mind Meatloaf while a midsection keys solo surely tips the hat to Rick Wakeman.

From here, it's into the throaty bluesy stabs that open up into an urgent organ riff reminiscent of a hyperactive 'Spirit In The Sky 'and those growly Waits reference points with 'Gold Tooth' as the concepts of love and freedom butt heads followed by the grinding Motorheaded leviathan that is 'Slag' only to confound expectations by breaking out into accompanying classical piano runs and interlude before the big thrashy finale.

Riding a Rhodes pulse and driving drums, it slows down somewhat for 'The Letting Go', a song about being imprisoned by "the old ways" you want to escape but from which you can't break free, a number which, impossibly manages to combine comparisons to both Pulp and Springsteen.

It's back to an urgent propulsive almost motorik drive with 'Black Blood', underscoring the intention to create an album that had something to say (here about striving to find freedom in the face of manipulation) which also dragged you on to the dance floor by the scruff of your neck, the vocals again exploding with Steinmanesque passions.

The downtrodden provide the lyrical platform for Troubleshooter, a funky junkyard blues with jazzy organ sweeps before galloping Glitter Band drums and treated organ effects take it into a lolloping Southern gospel blues rock boogie with 'Sharp Threads' with its "watcha gonna do?" refrain.

Moving from gospel to Gregorian, a liturgical massed voice chant introduces 'Secrets', Tensheds adopting a Cohen-like hushed and intimate spoken tone on the verses about having someone to lean on while the tremulous chorus swells on soaring wings. The Collard then returns to dominate the anthemic loss and letting go-themed ballad 'The Picture Book' with a contrast of crashing chords and fluid classical patterns. Having drawn comparisons with Meatloaf and Springsteen, this then is his 'Bat Out of Hell' and 'Thunder Road' wrapped together into three majestic minutes.

It ends with its longest track, tipping just past the five-minute mark with 'Forever In Dreams', returning to the overarching theme of loss and loneliness as the Rhodes and Collard join forces as the track surges from fluttering opening notes to a tumultuous crescendo by way of a fairground interlude as he sings of those that go before waiting to be reunited. The condemned are dancing all the way to the gallows.