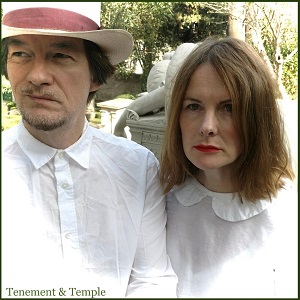 
It's been fifteen years since Monica Queen last released any new music, that being her magnificent second album, 'Return of the Sacred Heart'. Now, working again with fellow Glaswegian and Thrum co-founder Johnny Smillie, she returns with a new project and an outstanding first album steeped in themes of home and spirituality. I say this is her first in over a decade, but, in fact, working under their current name, in 2017 the duo contributed to the third and final group edition of Waywords & Meansigns, an online project dedicated to James Joyce's stream of consciousness novel Finnegan's Wake, setting to music the words from page 323 line 25 through to page 324 line 17.

This, though, is, save for one cover, all their own work, opening with the lullabying 'Loving Arms', built around simple acoustic guitar and Queen's quiveringly tremulous vocals, a sort of human theramin, as, providing her own chorale backing and with just a hint of the McGarrigles' 'Talk To Me Of Mendocino', she sings "I don't want to go to war with you", a universal comment as much as about a particular relationship. Next up is the dreamy 'I Know', Smillie providing a simple repeating guitar line, a swooning love song with a chorus on which her voice takes wings into the skies. The waltzing '10 More Years' takes the string section down to the Celtic honky tonk with the enigmatic line "I will go under the knife/So we can be man and wife", followed by the fairground lights shuffle of 'Your Sweet Face', a track which curiously reminds me of Louis Armstrong's What A Wonderful World'.

Not, as you may have thought, a song about the Regulation of Investigatory Powers Act, 'Ripa' actually refers to San Francesco a Ripa, a church dedicated to Francis of Assisi, and the buildings on the street on which it stands near the riverbank of the Tiber, and features whistling, drumstick clicking and Queen giving it some wordless oohing. One of many standouts, 'I Only See You In The Dark' is a simple, strings-dressed, acoustic strummed failed romance song of reflection, memory and yearning with keyboard swirls serving as a heavenly choir behind Queen's Eddi Readerish fragility.

Things take a spiritual turn with the circling melody line of 'It's Been A While, Lord', a poignant song of simple thanks for a blessed marriage and life, a solid relationship theme that extends to the chapel hymnal sounding, pedal steel keening slow waltz 'One Room House' complete with Wink Martindale-like spoken passage where there's no room for arguments or sulks because "when the shouting starts… there's nowhere to go."

The title sounds as though it should be traditional, but 'Where The Wild Roses Grow' is their own simple but beautiful affirmation of love and support, although as she sings "when it is over and it's time to go home, I will not leave you to go on your own… I must follow to the promised land" it becomes clear it's about asking for a blessing in making a pact to die together.

It ends with the solitary cover, a false start opening into a languorous, late night waltz through the evergreen 'Blue Moon' surely inspired by the similarly styled version by The Cowboy Junkies enclosed within 'Blue Moon Revisited' complete with the stargazing guitar solo.

Understated and beguiling, a musical Radox bath to soothe those tired emotional muscles, whether at hearth or altar, this wholeheartedly deserves your supplication.