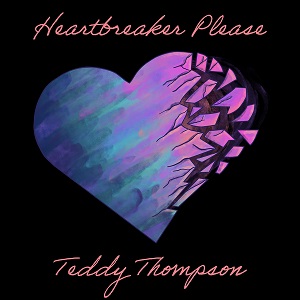 
In many ways, with his love of 50s doo wop, Thompson is the UK's answer to Chris Isaak, but he also has a strong affection for classic Memphis soul, and it's the latter that strikes first on the opening track to his new album, his first in nine years, in the form of 'Why Wait' as the horns kick in from the start and thoughts of Otis, Eddie and Sam & Dave with a side order of Sam Cooke come to mind as he sings "Here's the thing, you don't love me anymore/I can tell you've got one foot out the door/And I could try to hold on/But it won't be very long so/Why wait for you to break my heart".

The end of a relationship, drawing upon an actual break up with the actress he was dating in New York and told from his perspective, provides the thread that runs through the album, winding its way around those 50s influences tinged with a touch of Sedaka and Hispanic pop for the handclappy shuffling rhythm of 'At A Light' on which he asserts that his ex is going to find herself missing him, especially when, nodding to the album title, she hears some heartbreak ballad on the radio.

Given this retro ambience, the arrival of a drum machine briefly laying down a samba sway comes as a bit of a surprise on the title track, but then, father Richard guesting on guitar, it's quickly back to those vintage balladering sounds as the lyrics redirect to his own hurt and asking her to come back so she can break what remains of his heart. But hey, you gotta put it behind you and find another love, right. And that's what he does next as, rolling in on a steady drum beat and piano chords, his new girl comes along with a new set of wheels for 'Brand New' as he declares "she tells the truth/So I do that too/As much as I can" and that his new bag is "being happy not sad", though you can't help but feel the gentleman doth protest too much that he simply "wanna have fun".

He's spoken about being into Crowded House, and you can discern those Beatles-derived notes in the sunshine vibe of 'What Now', a come back to me number, that wryly offsets the ache to end the loneliness with the line "I love living on my own/But I can't afford the outgoings".

Keeping the musical mood low key, it's followed by another confessional heartbreaker in the organ-backed 'No Idea' where "the therapy is helping/But I still feel mostly sad" and, noting the extended metaphor, he's "a house with no foundation…a field that's turned to dust". It's a particularly pessimistic vision of a world in which "We are truly alone/No one cares/No one phones/As the light's going out/And you're down for the count" that serves as a marvellous self-pitying wallow in misery.

Romance isn't the only thing that's been soured by the breakup, on the bubbling Sam Cooke homage 'Record Player', even the music he loves has left him and now all he hears is piped in elevator anonymity and of he goes to the dancehall "They're not playing my song/They're playing something sounds like/Fingernails on a blackboard" and "Even the birds are singing/The biggest shh hit of the year". You can't help but think he's rather enjoying milking this one, his tongue firmly nestling in that clichéd jilted lover's cheek.

In his element now, he waltzes through the 30s strings-arranged cinematic reverie sounds of 'Take Me Away where, with lyrics that feel more like silent movie captions, he sings "Love take me away/Far away from here…How can you be mine/For all time".

The horns, courtesy Alec Spiegelman and Cole Kamen, return as the tempo picks up further for the light country-pop flavoured 'It's Not Easy' where this time the argument is "Try to understand I want the best for you/But it's not easy" when "You just tease me" and love is just a day to day thing", all with some fat sax, piano fills and Al Street's guitar solo. He may be sad, but the sound is joyous.

He ends back in midtempo ballad territory for 'Move At Speed', a raw falsetto and more nasal Oribsonesque croon of pain in the realisation that you need to stop and focus on the present and not get ahead of yourself if you want to find happiness cause when "You are running from yourself/When you move at speed/There is no release" .

A paradoxically musically buoyant album about being down on your emotional knees, but with the sense to be aware of how ridiculous that can sometimes be while still acknowledging the hurt, this heartbreaker is a big yes please.