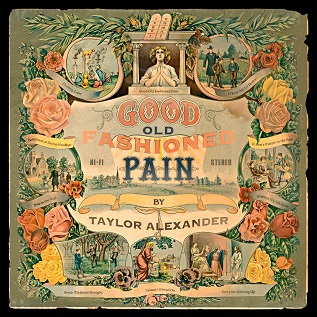 
Hailing from Atlanta, Georgia, Taylor Alexander reps the acceptable side of mainstream Nashville, leaning on traditional country sounds and musical values rather than production line sheen. If early Willie Nelson, George Jones and Hank Williams tick your boxes, chances are Alexander will too.

This is his debut album and, as he puts it, looks at the pain that makes us who were and learning to grow up. The swaggery title track kicks things off and sets the shape of what follows with its Southern twangy drawl, ringing electric guitars and catchy hooks, hitting the uptempo scuffling train track on 'Passing Lane' with its metaphor of how to live your life before pulling into the honky tonk for 'I Never Ask For Nothin'' (with the inevitable "so nothin's what I got" line), Whit Wright on pedal steel.

Resurrected from the EP, the slow waltzing 'Real Good At Saying Goodbye' pulls another glass from the beers and tears tradition, the whimsical shuffling uptempo 'It Don't Matter To The Rain' evoking Willie while, dropping a quarter in the jukebox, 'Break My Heart Tonight' (another from the EP along with 'Wishing My Life Away') , with its piano, steel, and lyrical nods to Hank is all goodtime Merle.

A notable stand-out is the wistful holding on to dignity and pride in hard times ballad 'Hole In The Wall' ("a roof overhead but that's about all"), the album ending on another high point with the reflective piano ballad 'Sorry For Growing Up' with its list of regrets at what's lost in the passing of time to become responsible grown men as he sings "if there's anything I could take back of all the things I did, I'm sorry for growing up, I won't do it again."

He's made an auspicious start, showing himself as an adept songwriter with an ear for a strong lyric and a catchy melody, as well as a distinctive voice that draws on the past but remains very much his own. It hurts so good and I look forward to suffering even better things to come.