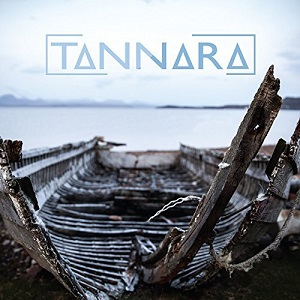 
Trig is the debut album from Tannara, a group of four young Scottish musicians who play contemporary folk music. It was produced by Rachel Newton, BBC Radio 2 Folk Award Musician of the Year 2017.

There is a raw energy and youthful exuberance to this music. Each of the instruments bounce off each other to create a magical sound.

The opening Bill and Jill states their case very well. Intricate patterns on guitar, harp, accordion and fiddle produce a punchy sound. The harp kicking in to provide light in between the booming accordion and vibrant fiddle.

Owen Sinclair takes the vocals on Three Ravens, which has a subtler arrangement with fiddle fills and guitar backing initially but the accordion and harp gradually make their presence felt quite beautifully.

I particularly enjoyed the sleeve notes which explained the basis of the tunes on the album, for example Bill and Jill are Becca's parents.

The playing is exemplary. Listen to the accordion and fiddle on the tune Look After Yourself - it is top drawer. Owen takes the vocals on When I First Came to Caledonia, a traditional Canadian song, again it has a simple effective arrangement.

Ashley's is a complex tune with the instruments combining to great effect, Owen sings again on Queen Jane but here there is more accompaniment for the rest of the band.

The wryly-named tune Deid Fish again highlights the prowess of this band. Harp, fiddle and accordion play the central motif over a guitar backing. The playing is electric and the effect spell-binding.The final track Sitting On The Ridge is a guitar-led lilting tune, the fiddle and accordion joining in and the harp cutting through the mix. Quite lovely.

The production throughout is crisp. Make no mistake these are four talented musicians who together make a joyous sound. Seek them out.

When I First Came To Caledonia