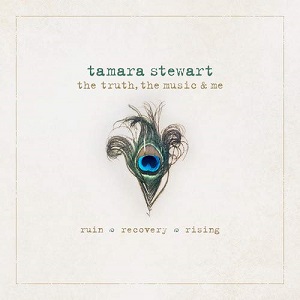 
Recorded in Nashville and released in her native Australia last year, but arriving now to tie in with live dates, this is the fifth album from the country singer-songwriter. Her voice at times reminiscent of Reba McEntire, it's divided into three sections with five tracks apiece, Ruin, Recovery and Rising.

Given the overarching theme is relationships, it'll be no surprise that Ruins deals with the break-up side as things fall apart, kicking off with the trapped but afraid to take flight imagery of the aching 'Birds In Cages', streaked with Dan Dugmore's pedal steel, rumbling drums and Ben Glover on backing vocals as she sings how "we're broken in all the same places."

The titles are signposts to the lyrics, case in point being the mid-tempo big drums and guitars 'Broke My Heart' in which the lines "You're supposed to heal mot cheat and steal/So how do you explain these scars?" are as much an attack on love itself as any lover. Likewise, the fiddle laced caught cheating and kiss off 'Piece Of My Heart' while, taking the power down a notch or two, 'Untied' is a poignant account of finally making the move and calling it quits ("some knots just got to be untied") with all the messy emotional and legal fall out that it ensues.

It ends with the only non-original, a simple and short acoustic strum through the gospel 'His Eye Is On The Sparrow' that provided a bridge to the post-split recovery phase appropriately kicking off with the violin and piano accompanied 'Blessed' about calling on her faith and surrendering to a higher power to make it through.

Featuring Bryan Sutton on acoustic guitar, the reflective, nostalgic rhythm chugging 'Dear Hometown' is, as it suggests, about going back to her roots to heal and find herself again, sliding into the bluesy country groove of one of the particular standouts, 'Haunted House' as she wonders how the woman who took her place can sleep in the room where she once slept or look at the spaces on the wall where photographs used to be.

Dugmore on dobro, Aubrey Hanie on fiddle, the strummed title track is another song about climbing out of the wreckage, of looking forward not back, drawing on the strength of faith, her music and her refusal to remain a victim. It ends with another brief, gospel infused bridge, 'It's Time' with its hummed intro and just guitar backing a call to wake up now the nightmares are over.

The resurrection part opens appropriately enough in rousing, harmonica wailing anthemic roots rock style with 'The Rising', not the Springsteen number but one that shares the same sentiment. The rock continues to roll, Steve Mackey's bass driving along the full pelt 'Love and Trouble' in which there's even a hint of ska to the rhythm, taking it back down for 'Face The Music', a song about looking inside, accepting the share of the blame, finding truth in songs and finding the voice "I wasn't using."

She revs back up for the Southern bluesy riff and swagger of 'Late To The Party' about making up for lost time with a lyrics that namechecks James Dean and Lynyrd Skynyrd as she declares "my bad is about to get good" while Mike Rohas' piano pours the shots.

As before, it brings this to a conclusion with 'Pages', another short number, not gospel this time, but rather a rock-infused stripped back yet muscular acoustic guitar swayer that basically says what doesn't kill you makes you stronger. The truth, the music and Tamara Stewart, it's a potent combination.