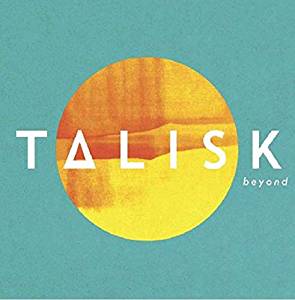 
Multi award winning Scottish instrumental trio Talisk have returned with their second album, Beyond. Joining founder members Mohsen Amini (concertina) and Hayley Keenan (fiddle) is guitarist Graeme Armstrong, with the band since 2017. Following on from their debut album, Abyss, the band describe the album as "a more representative idea of what we sound like live" and you can really hear how much their collective sound has grown and developed.

Opening track Montreal was inspired by an extended stopover after Mohsen's flight was cancelled due to a snowstorm. The gentle opening, becomes busier, with a sustained line in the fiddle and concertina over a more frenetic guitar riff. The concertina joins this and seamlessly transitions into the vibrant tune. The texture and intensity grow, with new countermelodies intertwining with the original ideas. The addition of strings from the excellent Greg Lawson expand the sound of the band without overpowering it, adding to the excitement and vitality of this track.

Title track, Beyond, features the only traditional tune on the album. Having listened to fresh original compositions up to that point, hearing a familiar tune came as a surprise. It fits perfectly in the centre of the final set and is a reminder of the rich tradition that has led to three such talented musicians coming together to add to the ever growing wealth of new music.

In contrast, Serbian Dreams offers a more lyrical and expansive view of the band. Again, the use of strings on this track is perfectly balanced with the sound of the trio. The central section contrasts with the calmness of the main tune, utilising a minimalistic build up before returning to the beautiful melody. The other slower tune on the album is Graeme Armstrong's tribute to his Grandfather. The tone of the fiddle really shines on this track and the use of pizzicato is also a really nice textural variation.

The stand out track of the album is Farewell, featuring a stellar line up providing the vocal riff that is infectiously catchy! Starting with the soaring riff as an instrumental, the track builds into a cracking reel which is definitely on my "to learn" list before the vocals take the riff over and grow the track to its conclusion.

Beyond is a cohesive and coherent album from a trio who have a very clear collective direction in mind for their music. Lively, vibrant and innovative, it will be no surprise to see Talisk adding to that long list of awards with this latest offering.