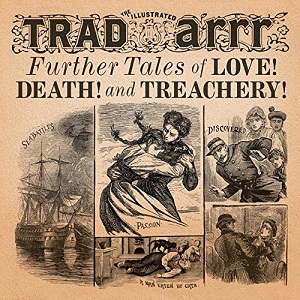 
I could almost swear the tricky typography's changed since this outfit's debut album (2015's Cautionary Tales), but on closer scrutiny I find that not to be the case after all - now there's memory playing tricks! But what hasn't changed is the seriously mighty nature of the music created under the banner of TRADarrr, whose stylish "folk-rock pirates" still plunder the seven seas of folk tradition for their raw material. In that respect, Further Tales… is a conscious sequel to its predecessor, pitching fresh and vigorous slants on texts from almost exclusively traditional sources. But in another crucial respect, Further Tales… is a different kettle of fish. Essentially, Cautionary Tales was a studio-based project masterminded by singer-guitarist P.J. Wright and drummer/multi-instrumentalist Mark Stevens, who both felt there was still much to be explored in marrying the English tradition with 21st century musics and instrumentation. For that album, onto a core five-piece lineup (comprising those two fine musicians plus fellow-LJE reprobate Guy Fletcher, with Gregg Cave and Marion Fleetwood) was grafted various "esteemed guest" performers on a track-by-track basis.

This gambit gave rise to a surprisingly cohesive end-product, but it quickly became apparent that there was plenty more mileage in that core lineup (and PJ and chums were clearly having such fun!), so after some debate and persuasion TRADarrr was consciously developed into a working, touring band with a clearly self-defined identity, and in the process became a seven-piece, with the addition of Mark Jolley and Phil Bond. However, even since then Mark J and Phil have themselves both moved on, their places having been taken by, first, singer/fiddler/pianist Gemma Shirley and second, bassist Tim Harries (erstwhile member of Steeleye). Further Tales… thus records the band in something of a transitional state, with Mark J playing bass on all but two of the tracks (The Cuckoo's Nest and The Bailiff's Daughter Of Islington) and Phil appearing on just one (The Bonny Lass Of Anglesey, which utilises a basic track that was recorded live).

Like its predecessor, Further Tales… draws on a wide range of latter-day musical influences and stylings to illustrate its stories. But I think it's fair to say that by and large, for all that it blows the cobwebs away from time-honoured dusty balladry it stays within the approved folk-rock template and doesn't do anything to frighten the horses. That's no criticism, for it nevertheless packs a sizeable punch, finding room for some canny explorations of texture within and around that wall of sound. The faithful recording brilliantly captures the ingenious separation of parts and lines and the sensibly sparing use of ancillary instrumental timbres, more of which are revealed on each subsequent listen. Nevertheless, at times there's also a slightly nagging feeling that some attributes within the group talent pool may appear mildly under-used - for example, considering the fact that three of the band members play fiddle, that instrument's colour doesn't figure quite as prominently as you might expect. Again this is no criticism, but (inevitably but satisfyingly) the overall group sound is quite unashamedly dominated by PJ and Mark's electric guitars (especially the counterpointing of the deep twang baritone and the soaring stratospherics which is magic!) and the rhythm section. The musicianship is massive, with each band member able to pick up a number of instruments to selectively develop the group texture when required. For instance, Guy brings to the mix mandolin, mandola, fiddle, guitar and drums, while drummer Mark adds cornet, autoharp, keyboards and programming; PJ augments his array of guitars with pedal steel, harmonica, soprano sax and dulcimer; and Marion has cello and viola as extra strings to her fiddle bow.

And as if that weren't enough, TRADarrr are blessed with four brilliant lead vocalists! Marion uses her smooth, silky and seductive vocal skills on Dream Not Of Love and the wriggling, twisting belly-dance of The Cuckoo's Nest (for which she even wrote some extra verses!). She also turns in a spine-tingling duet with Gemma on Lowlands Of Holland (which ingeniously incorporates the melody of The Water Is Wide, played wistfully on the cornet); Gemma's strong, sparky lead on The Drowned Lover is impressive too, its impact enhanced by a moody, grinding, almost ELO-like heavy string sound; and Guy makes a bold fist of The Golden Vanity. Gregg takes the lead for the remainder of the tracks, including The Bailiff's Daughter Of Islington (which storms along with a cheeky Stones-Brown Sugar riff!) and The Crafty Lover, and he memorably duets with Marion on Dream Not Of Love (his lovely setting of John Clare).

And there's a thought-provoking surprise too, in TRADarrr's reimagined version of Jack Elliott's classic Rap Her T' Bank, rather in the mould of Home Service (I could almost hear Mr Tams singing it). It's introduced by a silver-band-evoking cornet, then to the original powerful two-verse protest is appended two extra verses written by Pete Scrowther that celebrate - and lament the death of - the mining communities; my only reservation about this unusual treatment of the song is that it would've had even more impact taken at a slightly slower tempo. TRADarrr do wistful quite nicely, as it happens, although the impact of Spencer The Rover is compromised a touch by the tune used, to my mind flatter and less interesting than the one more commonly heard. My only other quibble is with the abruptly truncated ending of opening track Winter Winds (not the Sandy Denny/Fotheringay song, but words taken from a broadside). Finally, no TRADarrr album would be complete without an instrumental outing, and here the lone example is a chunky, bouncy hornpipe medley of Madame Bonaparte and The Golden Eagle (boots at the ready!) which sure won't disappoint the faithful.

Further Tales…is attractively packaged, with faux-broadside cover art, and complete with band photo portrait whose serious "attitude" pose seems to be cheekily emulating that of a certain group of well-known "dodgy bastards" of folk-rock!

Further Tales… gives us an exciting - and truly irresistible - feast of classic folk-rock, but so much more, for it stimulates the aural palette with its intensely imaginative and creative arrangements.