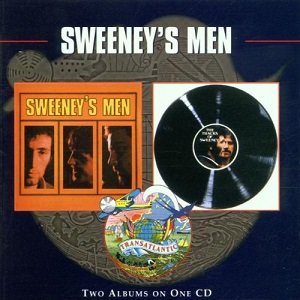 
The mid-to-late-60s Dublin-based outfit Sweeney’s Men occupies a pivotal place in the history of Irish music, not least for introducing the bouzouki into the tradition. The original trio – Andy Irvine, Johnny Moynihan and Joe Dolan – came together in 1966, although that particular lineup turned out to be short-lived, and Joe had left the group by the time of recording the eponymous debut album, his place having been taken by guitarist/banjo player Terry Woods. This LP boasted a spirited mix of material from English, Irish, Scottish and American traditions, all in enterprising treatments, and a hallmark of the Sweeney’s Men approach was the special bouzouki/mandolin interplay between Messrs. Moynihan and Irvine. The album contained several benchmark tracks, including the version of Willy O’ Winsbury which has become a folk standard, but which originated in Andy accidentally setting the wrong tune – that of The Croppy Boy – to a set of words he’d found in a manuscript! Established ballads and other familiar material were radically reworked in startling ahead-of-their-time new arrangements, and the album as a whole is regarded as very influential.

Immediately after this album was released, however (and to a decidedly mixed reaction), Andy grew restless and headed off to eastern Europe, where he immersed himself in Balkan and Bulgarian musical traditions. Andy’s replacement was guitarist Henry McCullough, contributing a measure of electric experimentation to the mix and the occasional song. One of which (A Mistake No Doubt) surfaced on The Tracks Of Sweeney, the group’s second album which came out in December 1969 – although by the time of its recording Henry had departed for Joe Cocker’s Grease Band and the Woodstock Festival. Essentially, The Tracks Of Sweeney was recorded by Terry and Johnny as a duo, and comprised mainly original songs by either or both of the two men, all rather in the in-vogue eclectic acid-folk styling of the day but with a subtler Irish undertone. However, a personal fallout led to the breakup of the duo a month before the album’s release, Following which, Terry was approached by a friend, Ashley Hutchings, to get involved in his visionary electric folk-rock band Steeleye Span, and Johnny departed for Nottingham with partner (Anne Briggs). That was that for Sweeney’s Men, aside from some intermittent one-off reunion attempts (with differing permutations of personnel) in the 1980s, 2007 and 2012 – as we learn from John O’Regan’s excellent booklet essay for this current reissue of the pair of Sweeney’s Men Transatlantic albums.

These LPs deserve to be permanently in the catalogue, for they are landmark recordings in Irish folk music which fully stand the test of time. And this latest reissue certainly scores in terms of presentation. It appends to the two LPs four pre-first-LP bonus tracks recorded for Pye in 1967 and 1968, which are certainly of some interest, The true completist will probably wish to hang onto his copy of the 2004 Castle anthology The Legend Of Sweeney’s Men, which added even more Sweeney’s-connected material in the form of a clutch of (admittedly somewhat throwaway) sides recorded by the Capitol Showband (on which legend, and imperfect recollection, admits to the peripheral involvement of one or more members of Sweeney’s Men). But as I said above, you really can’t go wrong with this new BGO set, especially if for any reason you don’t already possess these essential recordings.