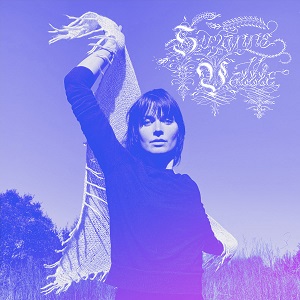 
A poet and songwriter living in Big Sur, I have to confess I've never come across Vallie before and, given the almost complete lack of any online information (her website just takes you to Bandcamp) I remain oblivious to all but the fact that this is apparently her second album following 2011's Recent Projects and the 2008 EP Water Table, both of which are also unavailable to hear.

So, you're left to form any opinions solely on the album, which, perhaps, is as it should be. The result of a break-up, , recorded in a studio housed in a hundred-some-year-old church,it's produced by Rob Shelton and, alongside Vallie on Wurlitzer piano, features an assortment of musicians, among them guitarist Cary Bond and Mountain Man'sMolle Sarle on backing vocals, kicking off with 'Ocean Cliff Drive', featuring Edwin Huizinga on violin, a slow, shuffle as she sings about driving on the winding cliff side of Highway 1, blinded by fog and rain.

The tempo picks up for the chugalong, brushed drums Love Letter giving way to the more soulful 'Beauty From The Blue Country' and the sprightlier country strum of 'Where Are You' before hitting the six-minute title track, introed by baritone guitar (Bond, Blake Kennedy and Doug Stuart all play them, so who makes the opening pitch is anyone's guess), a song calling on good company, stuck in a three day storm, to ease a broken heart.

It's not the longest track, that would be 'Sundowner', a dreamily melodic reflection of her family and another song that speaks of coming home, which passes the seven-minute mark, but then the tempo picks up to party down at 'Morro Bay', chugging along on a tale of "Midwesterners in Cali" having a good time as she recalls "I lost my cherry in a barn and I think it still shows".

It calms down again then for the understated, bluesy, organ-led 'Love Me Too' and, opening with a psychedelic haze, the alt-folk, kittenish vocals of 'High With You', another celebration and memory of hanging loose and getting a buzz with "windy favors, up skirt savors, drinks with flavors, suntan cravers, outdoor showers, rescue towers, cowboy singers, good-time bringers, rhinestone slingers, outlaw winners" and much more.

It ends with another song of friendship, 'Go On Down To Mary's' ("Love is in the water/Have yourself a bath/Love is in the bread/Help yourself to the last/There's plenty extra blankets/and room on the floor/No matter how many/or why your eyes are sore"), evoking the ethos of Big Sur's 60s heritage.

Very SoCal in its generally laid back vibe and Vallie's soft tones, on 'I Know The Way' she sings "I build what I can out of leftover stuff/my body and prayers is what makes it all up"; she's definitely got the craftsmanship.