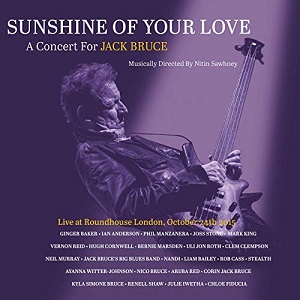 
The third youngest of nine, I was pretty well brought up on the music of Cream. I saw their 'Last Concert' at the Albert Hall when the film first came out, and have seen each of the three members of the band play in their own right over the years. When we booked the Jack Bruce Band at the University of East Anglia on 11th March 1977, I would finally get to meet one of my music heroes, except I didn't recognise him on the door and barred him from entry to his own concert! Thoroughly gracious, he then went on to perform one of the best sets I think I saw during my time there.

For all those reasons, when I was presented with the opportunity to review "Sunshine of Your love - A Concert For jack Bruce" I didn't need asking twice. This double CD of 22 songs comes with a DVD of the concert, so that's where I started. Unsurprisingly, there is a stellar list of musicians and singers involved: Ian Anderson, Phil Manzanera, Joss Stone, Hugh Cornwell and Ginger Baker (probably making his final public appearance) among them, and that list alone demonstrates Jack Bruce's influence the across music genres over many decades.

As a fan of much of Bruce's work, I was slightly apprehensive that the cast of many might not do justice to all of the songs, but this is a truly warm tribute from musicians young and old. Jack's daughter Aruba Red takes the lead vocals on "We're going Wrong" and while it is clear that the emotions are still raw one year after Jack's passing in 2014, she delivers a beautiful rendition of the song. Aruba Red co-organised the tribute with his wife of 35 years Margrit Bruce Seyfer. The film was directed by his daughter Kyla Simone Bruce who also performs on the night, with the concert's Musical Director being none other than Nitin Sawhney CBE. Watching the DVD felt like a double family occasion: the Bruce family, and then the wider music family whose lives they have touched over the years.

Were it not for the fact that music was Jack Bruce's life, the music might have been incidental on this moving night, but he would have demanded perfection and each of the artists rose to the occasion by way of their own personal tribute, belting out Cream favourites such as "Sunshine of Your Love" "Politician", "White Room" and "Badge", but also drawing from Bruce's enviable portfolio with songs such as The Graham Bond Organisation's "Hear Me Calling Your `Name" (1965), "Tickets to Waterfalls" and Weird of Hermiston" (the later performed by Kyla Simone Bruce) from "Songs for a Tailor" (1969), through to "Candlelight" from his final work "Silver Rails" (2014).

This is a tribute of some quality. The music is beautifully and powerfully delivered to a wholly appreciative audience, and the warmth in the arena is palpable. The concert raised £35,000 for East Anglia's Children's Hospices and that continues with a percentage of the proceeds from CD sales also pledged. Just another reason to put your hand in your pocket for this fine eulogy.