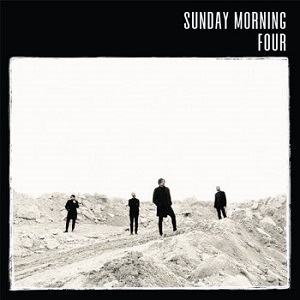 
Four is the fourth album from Cesena based band Sunday Morning, and the third since they reformed in 2015. The album is heavily influenced by the time band founder Andrea Cola spent working alongside the legendary producer Daniel Lanois at the Esplanade Studios in New Orleans. There he learned that there was no right or wrong way to make a record, only what works and doesn't work.

The record is certainly full of atmospheric touches, and the opening track epitomises this approach. It's a slow burner with a mournful air, full of depth and emotion. Broken Arms certainly ups the tempo considerably, with the kind of rock heavy number that would go down a storm in live shows. The change in style from song to song is a real feature of four. Sunday Morning never seem to settle, constantly seeking a sound that works for each song.

Power is another side step; a toe-tapper with drums driving it along and providing a nice contrast with the more subtle vocal performance. It's one of the highlights on the album. Among the rest of the tracks you have a the piano heavy bluesy Dreamer, the destructive but beautiful Waste My Time, and a glorious slice of Americana with Can't Stand Still. The final treat comes with the closing track, Prove It, which is a tragic tale full of passion and raw emotion.

Four is quite the experience, constantly throwing you off guard, refusing to fit neatly into any genre box. There's a lot of gold here, but definitely the odd filler song too, that don't quite fit with the quality of the songs around it. At its high points though, it's very good indeed, and clearly Sunday Morning are an evolving band with a great future.