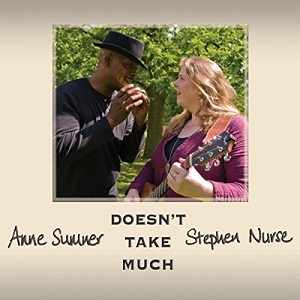 
Singer-songwriter Anne Sumner’s debut album These Hours appeared in the autumn of 2016, and provided an authentic emotional experience which nevertheless on first acquaintance seemed slightly undersold. As I hinted in my review of that album, though, the album was one to savour after picking the moment, and further listening has proved the value and veracity of that statement.

When in the latter months of 2017 I was greeted by this new EP, then, I felt unsure that I was quite ready for another such experience so soon. It’s a difficult balance when you almost know what to expect and yet you fear being disappointed. But I needn’t have worried, for while the key elements of Anne’s earlier record are carried forward into this new EP, its character is quite different, in the obvious respect that her songs, voice and guitar are most sympathetically embellished by the rather individual talents of Stephen Nurse, an expert player of the chromatic harmonica. The back-story is that Anne and Stephen heard each other play in a London pub one summer evening, and found they completely coincided in respect of their personal sensibility of living and breathing music in that shared space. They felt they were writing and playing for each other from the very beginning, Anne admits in her liner note to this EP.

It comprises six songs that were recorded live over two afternoons, having been but loosely rehearsed and largely improvised. The fluid soulfulness of Stephen’s playing supports, drifts, flows and comments on the melodic lines of Anne’s warm-textured vocal, and the result is extraordinarily compelling. Two of the six tracks, Wish You Were and Solid Ground, are revisits of songs from These Hours – interestingly enough, these are songs that I’d not singled out for special mention in my earlier review, but they feel here to exactly typify that combination of confidence and vulnerability that so struck me about many of the songs on that debut. The simpatico expression of emotion is most evident perhaps on Solid Ground, but the tender juxtaposition of Stephen’s caressing lines with Anne’s strong melodies is a key feature of their work together on all tracks. Other songs here were written by Anne since meeting Stephen, and their togetherness is palpable, especially perhaps on the lengthiest opus, From You. Anne and Stephen also turn in a pleasing account of the traditional song The Water Is Wide, although I feel it doesn’t reach its full potential until the two musicians get to play around with the melody a little more freely in the track’s final stages. Three of the EP’s songs – the new compositions, as it happens – also benefit from an additional element of rhythmic propulsion (Vicky Keohane’s bodhrán), and the whole set has been recorded with a well-rounded sense of presence. The package also includes lyrics, which is another big bonus point.

So, now to look forward to Anne’s next project – hopefully a second full-length album, although her website tantalisingly lists a couple more EPs as also “coming soon”…