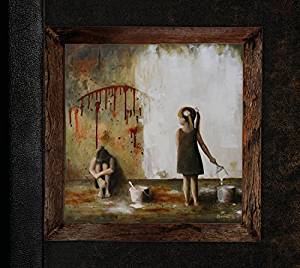 
Clearly influenced by the tone of Paul Thomas Anderson's gallows black Western, There Will Be Blood mingled with hints of Heaven's Gate, this third release by the Hertfordshire-based sextet is a 15-track concept album based around the story of the Harpe Brothers, America's first documented serial killers. As far as historical records can tell, born to Scottish parents in the late 1700s, most likely in North Carolina, Joshua and William Harpe, later known as Micajah "Big" Harpe and Wiley "Little" Harp , served the British during the War on Independence, subsequently becoming outlaws, operating as murderers, highwaymen, and river pirates through Tennessee, Kentucky, Illinois and Mississippi with thirty-nine known kills to their name, Micajah being eventually tracked and killed by a posse in 1799 and Wiley executed in 1804.

Featuring Melvin Duffy guesting on lap and pedal steel throughout, I begins with the scene-setting 'The Harper Brothers Theme', from whence comes the album title, a brooding swirl of Nick Cave-styled Southern gothic with David Austin and John Wheatley sharing lead vocals, scratchy electric guitar and Juliette Addison's violin, sporting the opening lines "We cut them open, carve out their guts, and fill their innards up with stones," a reference to how they disposed of their victims.

It's followed by 'Home', a simple piano, fiddle and pedal steel cinematic instrumental conjuring the Old West, Jay Seymour's piano notes carrying over into 'Eli', joined by mandolin and banjo for a swelling love song sung in the person of a future victim, adding irony to the line "you never know what you got coming."

Built around acoustic guitar, violin, piano, pedal steel and cello, 'To Dance With You Again' is a lovely 70sish country-rock ballad, a reflective, regret-stained love song as, hinting of things to come, Wheatley sings "If I'd never seen the light, would it seem so dark". A similar musical mood informs 'Lost & Losing', a piano-led big building mid-tempo ballad sung by guest vocalist Siobhan Parr and featuring Jodie Wheatley on glockenspiel, the line "Been so long since I felt good/Began to doubt I ever could" a deceptive note of hope.

The female perspective continues with 'Harpe Women', sung by Bella Chipperfield with Parr on backing, the instrumentation incorporating harmonium, stylophone, glockenspiel and, providing the spine, Chris Clarke on upright bass. The lyrics, however take on a far darker tone as the narrator talks of how her man "spills blue blood into the wet mud and broken bones/He cuts out red tongues for the fun hear them moan."

The lyrically dark, metaphorical 'The Buffalo & The Wolf' strikes a different musical note, arranged as a 52-second children's playground song with handclaps providing the percussive rhythm behind the shared lead 'little girl' vocals by Andeana Pacoulis and Francis Giles, the latter also providing the flute intro.

A five and a half minute instrumental, 'The Wedding & The Uninvited' initially echoes the same prairie mood as 'Home' with its strummed acoustic, dappled mandolin, waltzing violin and pedal steel only to take on a far darker shape midway with the arrival of doomy harmonium drone, nervy percussive sound effects and sonic dissonant howls.

From this point on we're into heavier lyrical territory, starting with the hauntedly sung The Hunt as one of the brothers' surviving victims tells how he was "left a lying /In pools of dirty blood" when they ran out of bullets, distorted electric guitar underpinning the vow to seek vengeance, referencing how, when he was killed, Micajah was decapitated and his head "stuck in a tree", while the closing lines pick up the refrain from 'To Dance With You Again'.

After such violence, it ebbs back into the regret-laden poignancy of 'This Ain't No Place Like Home', Wheatley picking acoustic guitar and backed by upright bass and pedal steel on a quite lovely acoustic that has the feel of a some wooden church salvationist hymn.

Underpinned by tribal drum beat with distorted electric guitar slashes from Paul Lush and sung in a simmering howling rage by Austin, 'Ballad of Little Harpe' has Wiley sensing his own approaching doom ("I smell the blood/I feel the twist"), giving way to another stripped down acoustic ballad of wistful regretful ache, the near seven-minute 'The Sadness', sung by Wheatley with echoes of Desperado-era Eagles and mournful violin from Addison.

The next track comes as something of a stylistic surprise, returning to the playground setting for 'School Tomorrow' which, accompanied by ukulele, banjo and jaunty violin, features a kiddie chorus singing "we're going back to school tomorrow", more Annie than The Proposition. The final two tracks keep the arrangements simple, 'Where There's A Will' a strummed acoustic honky tonk gospel with Wheatley evening singing out a Hallelujah as it swells out in singalong chorus manner to embrace electric guitars, violin, piano and a handclap-like rhythm. It ends, then, with melodica introing the last post of 'As Long As You Are', the initial strummed slow march giving way to a rousing send-off complete with pounding rums and yelps (though "the |sun will rise again tomorrow" again inadvertently conjuring Annie) before the pace slows for the anthemic closing lines of "you'll never be alone/For as long as you are home."

Wheatley and Austin may rather cast the Harpes in the same romantic revisionist light as outlaws and outcasts by circumstance as, for example, in Pat Garrett & Billy the Kid or The Assassination of Jesse James by the Coward Robert Ford, rather than the butchers of the history books whose victims reportedly also included children and babies, but, context aside, this is a terrific piece of storytelling and one of the strongest Americana albums this year from either side of the Atlantic.