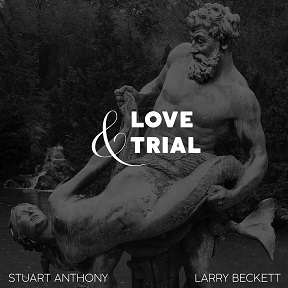 If Larry's name sounds familiar to you, it is probably because he was the songwriting partner to his school friend, the legendary Tim Buckley.

Larry wrote the lyrics of their best-known collaboration , the magnificent "Song To The Siren", which is, in my humble opinion , one of the beautiful songs ever written. Indeed, when on Desert Island Discs , Dawn French described it as "the song that made me fall in love again".

"Song To The Siren" references Greek mythology and ,in particular, Homer's Odyssey ,in which the Sirens try to lure lovelorn sailors to their doom on the rocks.

Since 2014 , Larry has been collaborating with Stuart and in 2015 I was fortunate to see Larry perform , in Liverpool, with Stuart and The Long Lost Band . The performance incorporated a superb rendition of "Song To The Siren" , which included Larry's spoken -word description of how he came to write the song with Tim Buckley.

Now, Stuart and Larry have teamed up again to produce "Love & Trial", which, like "Song To The Siren", draws upon Classical Greek Mythology , with words by Larry and music, in the Greek idiom, by Stuart ,who plays traditional Greek instruments such as the Tambouras and Baglamas , as well as the 12-string guitar, as favoured by Tim Buckley.

The album features a lovely ,live version of "Siren" by Stuart , which echoes Tim Buckley's live performance on The Monkees TV Show in November 1967.

"Love & Trial" comprises a mixture of poetry spoken by Larry , with sympathetic musical accompaniment by Stuart , as well as songs sung by Stuart ,with lyrics by Larry.

After the opening , mood-setting instrumental "Tambouras", we have Larry's dramatic recital of "Hymn To Zeus" by the legendary Greek poet and musician Orpheus.

This is followed by extracts from Orpheus's "The Voyage" which depicts the voyage of The Argo. Here we have two songs , "Worker At The Lyre" and "Song Like Honey" ,which reference lyre-playing. Orpheus perfected the art of playing the lyre and legend has it that his playing saved the Argonauts from being lured by the Sirens. The third extract is the atmospheric spoken word "Charybdis" which , with crashing wave effects, describes how Thetis saved The Argo from being wrecked.

The eerie, ethereal "Spirit Of Water" is based on a passage by the philosopher Heraclitus and features spectral vocals from Jess Thomas, who also duets with Stuart on "Wild Rose".

The Sirens raise their heads again in the final two tracks on the album. Firstly, "Oblivion" by the 19-century Cuban/French poet Jose-Maria Heredia , which evokes a doleful sense of ruin and abandonment.

"Love & Trial" ends , appropriately , with the gorgeous "The Song" which , to me, seems to be the spiritual successor to "Song To The Siren" and for which there is a superb video which can be seen on YouTube [ see "The Song by Stuart Anthony and Larry Beckett"].

I really like this album . I like the way in which Stuart and Larry have taken the premise of the classic "Song To The Siren" and , fifty years later, have developed it into a marvellous , cohesive album which takes the listener on an audio voyage that is awash with vivid images of the myths and legends of Classical Greece . An estimable album ,without doubt.