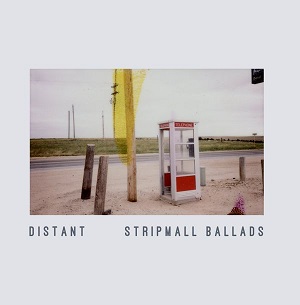 
A vehicle for Maryland-based troubadour Phillips Saylor Wisor, founding member of old time dup The Shiftless Rounders, as with past albums this was born from months travelling and performing across America, this time following the backroads rather than the highways, recorded in Columbus, Ohio with rock outfit Yellow Paper Planes, comprising drummer Brandon Wood, Darren Whiteker on guitar, bassist Evan Harris and Jeremy Ebert on slide.

The opening track is the spare, strummed 'Susan At The Crossroads', a reference to how, drawing on blues tradition, Wisor would travel until he came to a crossroads, then sit playing guitar and banjo until someone came along, be they devil or angel. Rumbling drums backdrop his dust-stained vocals, as, waiting for the titular Susan, "her hair, dark as the river", he sings "I am going to reap what I have sowed", she giving him lift before each goes their separate ways.

From such chance wanderlust encounters with strangers and the confessions elicited did the songs emerge, such as the dobro-backed scuffed shuffle 'Pull Over Johnny', apparently derived from an evening spent with a hustler fishing off a levee as the sun went down, he boasting of "shooting dope and making my living/ hitting that tail end of the week/Slinging my six when the tongue wags/sitting on the fix with the ziplock bags/moving that powder" but keeping the motor running "in case the police come".

Or then there's the sandpapery-sung 'Valerie', a snapshot of a woman growing old, "a belle in dust" winding up the clock on the mantle ("slowly twist the key/spinning wheels"), the fading hours of her timer and her faded friends ticking way behind "her glass face".

You'll also encounter the lazing acoustic bluesy 'Marietta' down on the banks of the river, a song that conjures images of "the night fishermen / and the women all wearing Harley-Davidson / whose arms and legs are made of Virginia Slims" as he muses that "there's nothing wrong with a sinner giving thanks" or, unfolding over seven minutes, 'Jennifer Pine Tree', a "reminiscent stranger" who, backed by hazing percussive sounds, he calls on to "be my saviour / in an instant situation".

Much is, like the music, impressionistic, rather than detailed narrative, evoking feelings rather than specific images, such as on the forlorn waltztime 'Juice And Sage' ("I'll lodge myself in a very dark cave/with walls made of sharp obsidian/my skin it will roughen and I will grow old / and no one will come to see me") or the dark trudge, mandolin fluttering 'Don't Mind Me' ("There were two ways out of town/ two ways to look at it/two live wires tattooed with venom/one was a ghost and one was full of children").

It closes with the stark and spare 'Slinger', a Cormac McCarthy-like confessional ballad involving a river girl, the drug dealer exploiting her and the young kid who took her virginity who is now her only chance, as the narrator tells how "a man died that night/it was self-defense/ but that don't make it right/ I don't have no regrets/you get what you deserve". The songs ends with his the bitter memory of his leaving her "on the curb.. begging me to take her/far from Wichita / the place I knew would break her", in order to avoid jail.

A balance of light and dark, scratched out on a minimalist sonic canvas, ingrained with dust and the flakes of lives, fans of Jim White, the bleaker side of Neil Young and the music of grizzled mountain folk singers played on paint-peeling front porches should seek it out.