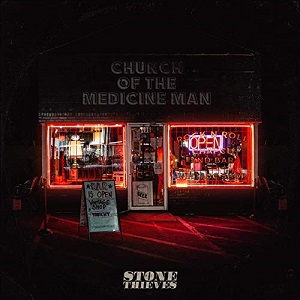 Sound-wise, they have been described as creating "A great Southern Rock noise" by Americana UK and musical reference points are noted as Creedence Clearwater Revival, Alabama 3, Blackberry Smoke and the Faces, which brings us up to date for 2020's four track EP 'Church Of The Medicine Man'. For this recording the core band of four are supplemented by Dan Marks on piano and keyboards and Cara Beard, backing vocals.

EP opener 'Wheels' barges in on reverbed guitar and drums with Aaron Gardner's vocal sitting neatly in the mix, his voice boasting a gravelly, less nasal Tom Petty vibe that's ideal for this slice of country rock. 'Medicine Man' slows things down a little and rolls through in stately fashion with more than a nod to The Band, while 'Let The Good Times Roll' sits squarely over in 'rock ballad' territory. Final track 'Wheels (Reprise)' indeed revisits the opening track but this time it is a piano led, reflective take and showcases Aaron's best vocal on the record as well as bringing out a melodic quality to the song that's not immediately obvious in the opening version.

So, quick as a flash it's over, a whistle stop tour through what 'Stone Thieves' currently have to offer. A thoroughly entertaining introduction to the band indeed.