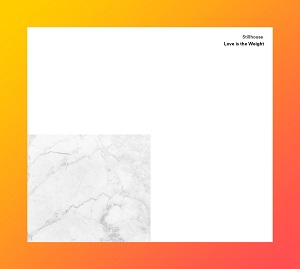 They term the mix 'progressive acoustic music', whilst the mini-album is rich with the tone and feel of dark Americana, the vocal style, lyrical content and wry humour set it apart.

The opening number, the evocative 'Razor's Edge', starts with shimmering acoustic guitar, Bolton's mandolin picking out a simple counter point. A slow build to the chorus, Bolton coming in on a second vocal line, then the bass implodes into the mix, driving us along on a rock solid, old-timey groove.

The gentle waltz of the title track 'Love is the Weight' continues the theme. The enigmatic 'stranger sleeping in a strange bed', Holly, is the subject of an obsessive and urgent love, Neaves using his break well, soaring into his upper register with good control. His voice is strong, and his style has a lightness and pop-like feel to it. He tells Fatea:

"I don't start with a concept, or a set subject - but rather I just play and sing off the top of my head until whatever's foremost in my thoughts starts coalescing into chords, melodies, and words. Most of the time these remain disconnected and unresolved; which is why I have probably thousands of half - or even quarter - finished songs and thoughts. Influences-wise; I'm unsure! As I don't tend to write in a similar way to the artists I most enjoy. A lyric from Nickel Creek's 'Beauty and the Mess' always comes to mind when thinking about song writing - "behind the melody the words don't mean a thing". I've always felt the lyrics are the least important tool for communicating feeling. I'd much rather write a song that sounded right, than read well."

There is a nod to their old timey roots on the record's only instrumental, the traditional 'Elzics Farewell', Bolton's mandolin confident and fluid, the track developing over breaks and stops, with dexterous runs from Neaves' guitar and Mefford's bass, and tempo changes being well executed; although the overall effect is restrained, one senses this talented band have another gear or three to move up.

'Five Thousand Miles' sees Neaves lamenting the distance between a boy and his love in a mellow rocker. A playful, slow blues intro, leads us to the gypsy jazz swing of 'In My Heart'. The album finishes with 'Numb', the band lay down a funky groove, Neaves again bemoans a lost love.

Neaves' song-writing is strong, but limited in content, and the confessional ballads start to wear on repeated listening. The production and performance is polished, but polite; and lacking in the fire that is reportedly a feature of their live shows. But worth a listen and a band to watch out for.

A confident release from a talented band of musicians, performing widely this summer including gigs at Wilderness, Boomtown, Beverley and Broadstairs.

Love Is The Weight