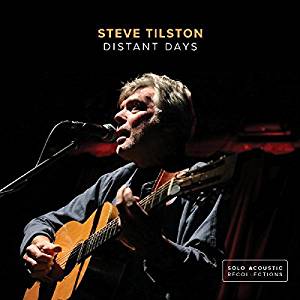 Steve Tilston
Album: Distant Days
Label: Riverboat
Tracks: 19
Website: http://www.stevetilston.com
.It's always a joy when a Steve Tilston new release drops through your letterbox for review and his album "Distant Days" is no exception.

Nineteen tracks, just voice, guitar and a single banjo, Steve revisits his back catalogue, reinterprets songs well known and obscure and has you hitting the "repeat" button frequently.

From his first album, "An Acoustic Confusion" back in 1971 we are treated to three tracks including "I Really Wanted You", a perfectly fair representation when you consider a certain Rod Stewart ordered a whole box of the records to be given as gifts to friends such was the brandy soaked vocalist's admiration. He also through his manager invited Steve to his pad, a man of principle Mr Tilston snubbed the opportunity offended that the call hadn't come from Mr Stewart himself.

Youthful arrogance perhaps but none reflected in the opening song the excellent autobiographical "The Road When I Was Young" a sad sweet and warm ramble through a life time, it tugs at the listener in so many ways, forgotten memories brought back effortlessly - the mark of a master songwriter.

"Rare Thing" is another masterpiece that Steve has chosen to revisit, the original with a full band was from "Such & Such" and another version with a full choir appeared on the comprehensive and informative 5cd box set "Reaching Back" on the Free Reed label.

Other highlights for me are "Pretty Penny" written a year before the financial crash and "King Of The Coiners" a tale of gold snipping in Hebden Bridge in the 18th Century, both first appeared ten years ago on "Ziggurat".

Add in a trio of new instrumentals which showcase what a superlative and deft guitarist Mr Tilston is and we close with the most well known and covered of Steve's songs "The Slip Jigs & Reels".

"Distant Days" has the effect of refreshing your love for the music of Steve Tilston, seeking out the originals from your collection and tracking down those CDs you don't yet own. And if that was the point then it's a job exceedingly well done.

Time Has Shown Me Your Face