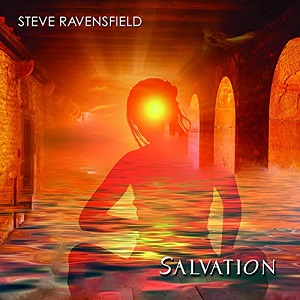 
Salvation is the third solo studio album from West Midlands based singer songwriter Steve Ravensfield. The last few years have seen a bit of a purple patch for Ravensfield, following the release of Broken Diamonds back in 2016. After coming close to getting signed with his band Tripped in the 90s, it had been a long time away from music for him. After a debut packed with potential, Into The Next Life the following year felt like a continuation or companion piece, so I've been looking forward to a follow up. It's good to see him back with Salvation.

There are a lot of familiar touches evident immediately on Salvation. Ravensfield is a very recognisable singer, with a vocal style full of gravitas, soul, and with a surprising depth to it. Yet the time in between albums has definitely seen a slight evolution, with what feels like a less showy and more introspective record. There are still the odd songs here that are bridges to those earlier releases; Ain't Nothin' Like Your Lovin' for example is a faster tempo track with a nice rock and roll feel that wouldn't have appeared too out of place on either the debut or follow up albums. For the most part though, Salvation is a deeper more soulful collection than its predecessors.

Oh Wow! which kicks off the album in fantastic style is a great example. Eschewing the easy radio friendly vibes, despite a briefly soaring chorus, it's a deep and beautiful track. There's something of a gospel vibe to I Will Light Your Way, which follows the opener. Both tracks represent the evolution of sound well, and really shine a light on the lyrics.

The highlight of the album comes at around the half point with the superb Song For Bowie. With a title like that it's not hard to grasp what the subject matter may be, but this is a superbly crafted love letter to the music of David Bowie, with emphasis on love. The attention to detail is just joyful, with wonderful musical touches throughout. It's impressive that this is unmistakeably a Steve Ravensfield song, but still fitting in so many touching points to Bowie and his music.

As strong as his first two albums were, Salvation is a definite step forward for Ravensfield. This is clearly an album from a musician growing in confidence and really finding his sound. Salvation is the type of release that plugs straight into your soul, and while it's a slower burner that previous releases, it has all the more longevity because of it. Roll on album four.