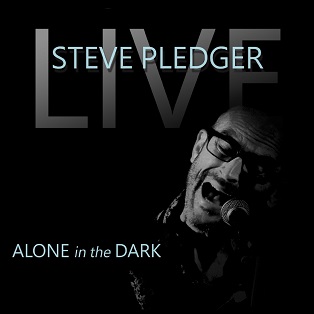 
Steve Pledger’s reputation as one of the nicest guys on the folk music circuit predated my only encounter with him a few months ago. His music is highly sensitive, lyrically beautiful and heartrending in equal measure. You can reach out and touch the emotion in this man’s voice, and it takes great skill to convey that on record as well as in live performance. Being Steve Pledger, he would probably shy away from such acclaim.

“Alone in the Dark” is a live ‘mini-album’ recorded at Ralegh Cross, Somerset in November 2018, and opens with the beautiful “Friends and Fathers” from his 2015 “Striking Matches in the Wind” album. Like “Matches”, there isn’t an underperforming track on “Alone in the Dark”. Steve explains “the aim was to capture the spirit of the evening…and stay true to the performance itself – sonic warts ‘n’ all”.

Introduced as his confession, “Back to the Beginning” musically lifts the mood, with a lyrical critique of how our race has become, selfish, profit driven, manipulative and deluded, suggesting that we would be better going back to where we started where there was only love. Never a ranter, Pledger’s lyrics are always carefully considered and elegantly delivered.

“The Parable of Intent” begins with a conversation between a man and a mountain, with each giving a perspective on the time they are on the planet (Matches). The song questions our purpose on this earth and presents a utopian vision of inclusion, community, and respect for others. Steve’s songs frequently carry a theme of protest at the world around us but you could never brand him as a protest singer. Quite simply, the man cares. That comes across loud and clear in the poetry of these songs.

“I Spat Fire” was my immediate standout track on first listening to “Somewhere Between”, and while it would be unfair to pick one song out from this truly excellent live performance, a favourite song often remains a favourite song and this version certainly doesn’t disappoint. “Me and the Silence”, also a favourite from “Somewhere Between”, slows the pace and shows what an accomplished acoustic guitarist he is. Lyrically frequently laying himself bare Steve Pledger transmits both sensitivity and vulnerability: “And the silence I know I should fear, that somehow keeps pulling me near until its almost all I can hear”. These are two songs that I will always go back to in my collection of thousands.

“Creation is Laughing” almost smiles out at the listener by comparison, and finds comfort in familiarity, and by way of recognising that life and history runs in cycles, pleads for the light to be let back into all of our lives, currently embroiled in the politics of insensitivity, division and greed. You can always tell when a song is powerfully delivered by the silence of the audience. You could hear a pin drop.

“Matches in the Wind” for all us who feel “ah what’s the point”, celebrates those who continue to show example against the odds. The world can feel like an oppressive place even for those of us who experience love and kindness, and have enough money and resource to live in relative comfort. This beautiful song of hope would have been an appropriate enough song to grace the conclusion to a performance as well-crafted as this, but the album rounds off with a bonus track to enhance the message of hope, a rendition of Pete Seeger’s “We Shall Overcome”.

When a solo artist records a live album there is no hiding place. There are no other musicians to hide behind, and it takes a special kind of determination to pull off something of this quality. Steve Pledger’s performance exudes a warmth that few artists ever achieve, but it’s just how he is.