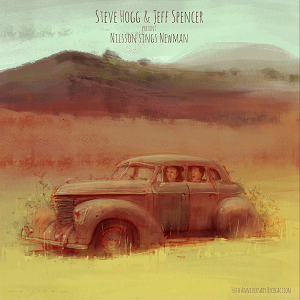 
The passage of time and access to an ever increasing history of recorded music, offers musicians the chance to revisit their own pasts or the past of others. It is a minefield of gems and fingers down a blackboard tribute acts. Many of the most successful are fan musicians paying tribute to their heroes. So Somerset Musician Steve Hogg presents his version of the much loved but 'lost' Nillsson sings Newman album originally released in 1970. Recorded mostly at Real World Studios, this will captivate Nillsson and Newman fans and hopefully send anyone who isnt in search of the originals.

Steve obviously knows the album inside out as his versions are from the heart, capturing the spirit and feel without being slavish recreations.

Steve Hogg has the voice, nodding to both Newman and Nillsson. The lush harmonies, the hook filled piano and the slightly dry delivery are just perfect. His "Vine Street" follows the arrangement perfectly and possibly sounds more Harry than Nillsson himself does. Steve's "Love Story" is just breath taking, the layered voices and the piano summon the spirit of the original perfectly. "Yellow Man" manages to bring out both Harry and Randy with echoes of both distinctive vocalists in Steve's singing. Hogg's voice swoops and soars like it should as majestic as Nillsson on stunning "Caroline" and "Cowboy". On "Cowboy" both his singing and the piano crackle with emotion. Electronics and samples build up a power that goes beyond the original. "The Beehive State" bursts from the speakers with some big bodied ferocious brass and a rock solid beat. Many a nod to Kansas City Jazz, but either way spirited and powerful. "I'll Be Home" and "Living Without You are sincerely delivered gospel lullabies, Steve's voice with its Nillsson inflections brims with emotion. "Dayton Ohio 1903" doesn't quite have the wounded fragility of Harry's voice, but his jazzy sense of timing is spot on. Hogg's reading of "So Long Dad" is warmer, shot with longing rather than melancholia. "Snow" is a track left off the original album, Steve Hogg's voice and Jeff Spencer's piano are just stunning, with strings adding depth and emotion.

A delightful mix of homage and reimagining that both recalls and surprises. The sleeve heralds a 50th Anniversary Recreation, but its often a recreation of spirit and feel, than a slavish period piece with so many reasons to listen.