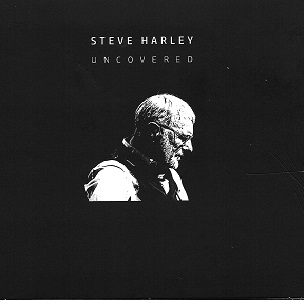 
A good friend of mine who is a dedicated fan of Steve Harley sent me this CD earlier this week. Although I have been aware of Steve for many years and have even seen him live, I could never claim to have been blown away by him or his band. This new CD might just make me change my opinion though.

Steve could never be regarded as the usual stereotype of a music icon. Happily married for almost 40 years, he is now approaching his 70th birthday and seems to be a man that is totally at ease with his life and music. His career has taken a number of twists and turns. An enormous number 1 hit for which he will probably always be remembered and almost becoming the Phantom in Andrew Lloyd Webber's classic musical before the producer decided to give the role to Michael Crawford after Steve had rehearsed the part for the previous 3 months. The duet with Sarah Brightman is still available and well worth a listen.

The title of this new album is "Uncovered" and as it infers, contains a number of cover versions of classic songs, although Steve refers to them as Interpretations. That is a far more accurate description as is in each case Steve has put his own personality, musical passion and ability into the songs. This combined with his gritty soulful voice proves to be an inspired choice as the result is an album of sublime music.

The eleven tracks on "Uncovered" include two Steve Harley originals, two traditional folk songs and seven reworked covers; the latter being some of the songs that Steve claims he would have liked to have written. I can understand his choice. This is a totally acoustic based album without keyboard and "not an electric note in earshot" according to Steve. A genuinely "unplugged" album unlike others that have made the same claim.

The album opens with Steve's "Compared With You" originally released in 1976. This song is worth listening to for the intro alone which is simple and quite beautiful. The second Steve written track is "Only You" which was written in the 90's but never recorded. Certainly, a case of better late than never.

The two traditional songs are "Ae Find Kiss" and the beautiful "Star Of Belle Isle" featuring the wonderful Eddie Reader on guest vocals. Nobody has ever found out who wrote this which is a shame as we will never know who to thank for this little gem.

The reworked songs are from a wide-ranging band of songwriters including, David Bowie, Errol Brown, Lennon & McCartney, Crispin Hunt, Jagger & Richards, Bob Dylan and my favourite track on the album written by Cat Stevens. "How Can I Tell You" has never failed to bring a tear to my eye and Steve's version achieves the same Kleenex induced state.

When I first read the list of songs on the CD, I thought that perhaps Steve had stretched himself too far but these versions are all very different to the originals and work quite brilliantly. I am certain that all the songwriters will be pleased to have been given this tribute by Steve and it is a shame that Errol Brown is no longer with us and therefore is unable to hear this delightful version of "Emma."

Steve's love of music and performing continues unabated and he has just commenced a nationwide tour with either his full band or a stripped back acoustic group depending on the size of the venue. His first gig being held and very well supported in Harrogate last week. Steve and his fellow musicians are going to have a very full year and will thrill audiences wherever they play, but he will still, no doubt, find plenty of time to return to his farm in Suffolk and his family. After all, that is what his life is about; Family and Music.