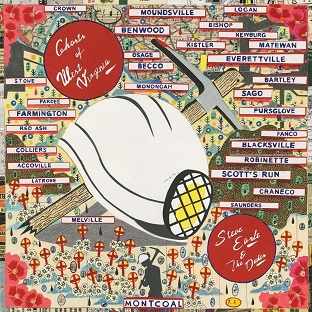 
Ghosts Of West Virginia is something of a special project for Steve, in that it explores the historical role of coal in rural communities, notably that of the Appalachian region of West Virginia, and specifically in the context of the devastating explosion at the Upper Big Branch mine that took the lives of 29 West Virginia coal miners in 2010. Seven of its ten songs have their origins in a stage play Coal Country, which toured earlier this year, a powerful drama where Steve appeared on stage in a kind of Greek-chorus commentator role. On this CD, he performs these songs with the current incarnation of his backing band The Dukes - Chris Masterson (guitar), Eleanor Whitmore (fiddle, vocals), Ricky Ray Jackson (pedal steel, guitar and dobro), Brad Pemberton (drums) and Jeff Hill on bass (replacing Charles Kelley Looney, Steve's longtime bassist who tragically passed away just prior to the recordings for the album, and to whom the record is now dedicated).

This is tough, resilient music in the best Earle tradition, with that characteristic gravelly, growly voice well to the fore. The set opens with the driving a cappella worksong-flavoured Heaven Ain't Goin' Nowhere, following which Union, God And Country explores the employees' fight for improves pay and conditions through the process of unionisation, with Devil Put The Coal In The Ground providing the context for their employment. The legendary John Henry becomes a Steel Drivin' Man in Steve's tribute to a hard-working miner. The core of the album comes with the reflective, fatalistic Time Is Never On Our Side, as poignant a three-minute song as you're likely to hear on the subject, and the album's most direct commentary on the disaster It's About Blood, a thrusting bluesy number whose coda is a litany of the names of those who died. After which, the show's closing number If I Could See Your Face Again - heartrendingly sung by Eleanor - makes even more of an impact. The album, however, moves on to three more songs written since, but complementary to, the stage show. The forthright Black Lung deals with the deadly occupational disease caused by long-term exposure to coaldust, and world-weary album closer The Mine expresses the mixed emotions of a man whose only option to avoid hard times is the hope of employment at the mine. In between these tracks is Fastest Man Alive, a rockabilly-styled tribute to test pilot (and local West Virginia hero) Charles Elwood Yeager that doesn't quite fit with the mining-related songs.

Perhaps the whole album could've benefitted from a re-sequencing that better reflected the stage show, but that said it's still a very strong collection of songs, couched in Steve's signature feisty, energetic, rootsy country styling, with his thoroughly distinctive voice and totally classy and rough-hewn musicianship from all concerned. And resplendent in good solid, punchy and well-balanced sound.