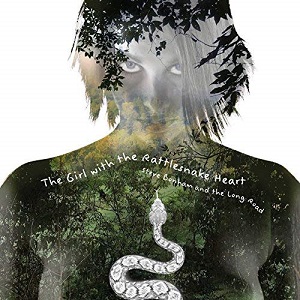 
Back in the day, the notoriety in music was being "banned by the BBC", you tuned to Radio Luxembourg or Caroline to find out what the fuss was all about. Or you brought the record. Possibly both.

In these days social media has largely taken over the role of introducing and promoting artists that haven't yet flashed onto your radar. Unless of course you are deemed to be in breach of Facebook's policies, as "The Girl with the Rattlesnake Heart" was.

Mal Mackenzie's striking cover art of the new album by Steve Bonham and the Long Road depicts a beautiful young lady with leaves superimposed over her hair, with dense foliage spreading down from her shoulders. With a rattlesnake heart. Yet if you look very closely amongst the undergrowth there is a glimpse of a nipple.. Just enough to get it pulled from the site. And shared widely - the accompanying video (by Dan Hart shot in atmospheric setting of Nerja, Spain) notched up over 50,000 viewings.

The gunslinger theme continues into "The Last in Line", both songs written by Bonham and the multi faceted Kev Moore who adds bass, drums and lead guitar. The pair, ex schoolmates last wrote together when they were teen-agers attending John Port School in Etwall, Derbyshire.

A change of pace, a spoken introduction, backwoods life, at first hearing, a love song, looking at what you have now and comparing it to your past, "The One I Loved Before" you search for the hidden metaphor. Co written by Bonham and Chris 'the Bishop' Lyndon (piano, tuba) it's a melancholy tale with an infectious chorus and great harmonies.

"Ballard of the Dragon's Trail", acoustic guitar reminiscent of Love's Forever Changes, turns into a rocker, leaving a small town, escaping on a Harley at 98mph, wanting a better life, taking chances.

Sandwiched between the originals, Steely Dan's "Do it Again" with tuba and a lovely jazzy piano solo from Lyndon makes you want to hit the repeat button, whilst the traditional "Wayferin' Stranger" is given pace and benefits from tasteful, subtle, electric guitar by Moore.

Back to the originals, back to the project of "Gone to Look For America", Steve Bonham's chronicling of his trip around the backwoods which includes not just this album but also "Reliance" the sister release and on top of that a book "A Beautiful Broken Dream".

"Beautiful Broken Dream" is included here as a track, plaintive, gentle, sad, a lamenting reflection on what North America has become since the land was solely occupied by the Native Americans.

If cowboys did indeed die with their boots on then perhaps "Won't Lay My Guitar Down" is the musicians equivalent, a Rock n' Roll life story with great honkey-tonk piano.

At the end of the day "Maybe I'm Just a Man", late night reflective reminiscing of love, it's a perfect finish to close the album.

All throughout, "The Girl with the Rattlesnake Heart" resonates, Steve's Bonham's personal journey fleshed out by The Long Road gives you the appetite for more. Comparable to walking into a coffee shop spotting that gorgeous slice of cake sitting on the counter, it's calling you, it's impossible to resist. And having devoured it you want more especially as in this case it's completely calorie free. "A Beautiful Broken Dream", the book, "I can hear you calling" as the Canadian band Bush once said.

The Girl With The Rattlesnake Heart