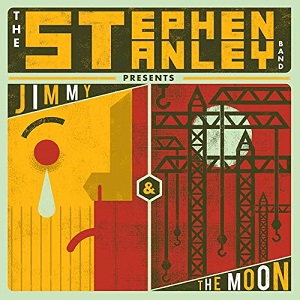 
Canadian frontman and guitarist Stephen Stanley is best known for his time with Lowest Of The Low, the nineties band who released Shakespeare My Butt, voted one of the ten best Canadian albums of all time. Jimmy and The Moon is the new album from his new band. Well, I say new, but it's been out since 2017. For those of you already familiar with the record, it's well worth a revisit, and if you weren't previously aware of it, now is the perfect time to get acquainted.

The opening of the album is one of the strongest I've heard in some time, as the first four tracks are solid gold standouts. I Don't Want To Talk About It is a great little rock track with a distinctive vocal performance. The Troubadour Song is a celebration of a beloved bar and plays out like The Pogues meets They Might Be Giants. The title track was inspired by someone shuffling out of a local dive while talking to himself, and it's a wonderfully epic sounding song. Then there's Under The Mynah Bird, written about his grandfather working in a sporting goods store under the Yorkville coffee house where Neil Young and Rick James played their first shows.

That's not to say the rest of the album isn't very good. Melinda is an irrepressibly upbeat toe-tapper which positively flies along, and Next To Me is a raw and brilliant duet with Hadley McCall Thackston. Both would be the highlights on lesser albums. California is a great end to the album, constantly building and then pulling back, marching on to a deliberately underplayed ending that nevertheless provides a cathartic note of closure.

Jimmy and The Moon is a great album, fusing elements of rock, pop and folk into something that feels both familiar and yet still fresh and unique. So if you've not heard it yet, go grab a copy and get listening.

Under the Mynah Bird