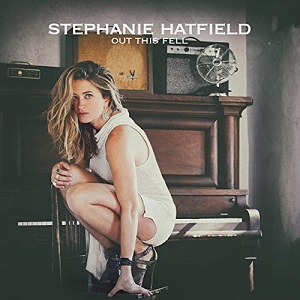 
Stephanie Hatfield is an interesting mix, little arty textures and found sounds, the looped backing vocals on "Away Gently" or the operatic vocal on "Gone Gone Gone", married to big brush classic rock singer vocals and sophisticated production straight out Californian Fleetwood Mac. There is a depth and an intensity to this performer and album, that goes beyond the tasteful and restrained cover. "Away Gently" is an emotional rollercoaster, disquiet and rage brush shoulders. "Day or Decades" is a muscular monster, huge electric guitars and passionate roaring vocals, still managing to sound soulful rather than just loud. Stephanie's vocal and the guitar end sound like lifts from late sixties Jefferson Airplane. "Gone Gone Gone" perfectly pairs Hatfield's and Grace Askew's voices, raising the heat further still. "In These Woods" is more intimate, Civil Wars playing with Durutti Column, there is a brooding gothic heat again cranked up by some unusual samples. That looped sounding guitar continues with charged intimate vocals on "Not Here", Karina Wilson's fine violin and a surprising almost mariachi trumpe keeps you guessing to the end.

"Never Go Away" is special, generating an atmosphere with its slow tempo burn and the minimal electric guitar of Daughter solo project Ex:Re, or the brooding moments of Echobelly. Stephanie's voice just smoulders and burns, while Bill Palmers goes up to a tasteful thirteen. "Lucy" is a florid flamenco guitar romp, with otherworldly noises from the trumpet and violin, while Hatfield soars over the top. Guitars and Pedal Steel draw space and the huge landscape on "Michigan" with Bill Palmer and Stephanie delivering intimate vocals on this charged album highlight about. love and regret. "Like Sweetness Does" is another stripped back shimmering gem, Jeff Buckley chiming guitar and voice slips into Maddy Star territory. Less is definitely more on this vocal tour de force closer. A classic case of a final track, placed at the end as it can only be followed by silence.