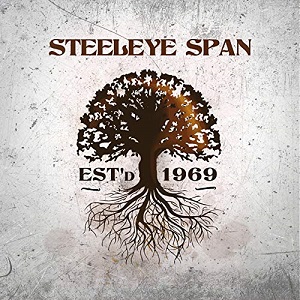 
This 50th anniversary album from folk-rock pioneers Steeleye Span marks another significant milestone in the illustrious annals of that trusty genre. But, never a band to take the easy option and cobble together another retrospective self-congratulation exercise, the mighty seven-piece outfit has pulled all the stops out to deliver a supremely confident set of all-new material that both celebrates and consolidates the Steeleye brand’s justifiably proud longevity.

It’s a band that has seen more changes than many of its peers, a record only equalled by fellow-folk-rock-pioneers (and fellow-half-centenarians) Fairport (and even that fact may be hotly disputed in some quarters!). The current lineup has been in place for a mere three years. Founder member Maddy Prior is still at the helm as she has been throughout (aside from a brief hiatus around the millennium) – and she’s as majestic a presence as ever, still soaring aloft, assured and mature, if (inevitably) singing in a slightly deeper register these days. Drummer Liam Genockey is the next most long-serving band member, and remains a major driving force in the band identity. Strikingly individual violinist Jessie May Smart, together with brilliant guitarists Julian Littman and Andrew Sinclair, virtuoso of sundry stringed instruments Benji Kirkpatrick and robust bassist Roger Carey, all comparably recent recruits, complete the lineup with a more-than-meets-the-eye roster of discrete versatility, as can be heard in the variety of sounds and styles you’ll encounter on Est’d. 1969, an album of contrasts which nevertheless retains a distinctive Steeleye sound for much of its 51-minute span.

Put simply: play just a few seconds of tracks like Harvest and Domestic to almost any folk fan and they’d recognise the band immediately. Some other tracks might take a little longer, but if Maddy’s singing lead then the decision’s always going to be much easier! Anyway, there’s plenty of vintage-sounding trademark Steeleye to savour on this new album, which as ever mixes innovative arrangements of traditional songs with group compositions couched in, and developing from, a traditional style, and a couple of choice (and contrasted) covers. But never in a predictable way…

So the new studio album, the band’s 23rd, proves both comforting and invigorating. Opening salvo Harvest kicks off with an a cappella clarion call to arms – “The Neck!” signifying the end of the harvest. That heralds a vibrant double-dose of powerhouse stomping folk-rockery complete with memorable rollicking chorus and a biting commentary on injustice within the agricultural community barely concealed within the boldly versed lyric – I might term it taking on the tradition and beating it at its own game. Masterly – and with a swaggering, brazen musical setting to match. And a brilliant way to open the album.

The band then steers listeners through a variety of triumphant essays in folk-rock, demonstrating the breadth of styles that can encompass. The trad-arr. classic ballad comes in different guises. First on track 2, Old Matron, a self-confessed “blockbuster of a ballad” where the hero fights against incredible odds and wins etc etc.; at the outset it’s done to a fleet-footed, light-textured skipping mando riff in a setting that more than anything recalls the scoring and sensibility of staple Jethro Tull albums Songs From The Wood and Stand Up – hell, they even bring Tull’s Ian Anderson in from the cold to tootle his fair flute on this number! The stockier backbeat and some weird vocal effects are introduced as the narrative grows darker and weightier. The ballad count resumes on track 4, a retelling of Child Ballad #29 (The Boy A The Mantle – aka Three Tests Of Chastity), an Arthurian tale where Maddy yields the lead to Julian and another new instrumental colour is added to the Steeleye armoury (albeit as a one-off) – a harpsichord, played by guest Sophie Yates, which really (ba-) roques! (Pun fully intended!)

But tucked in between those two big ballads there’s an intriguing interlude in the shape of a rather unexpected cover – Dave Goulder’s iconic seasonal observation January Man, which ok, the world and his dog has already covered…but to hear Maddy’s latest take (her previous version was with Tim Hart back in the day) proves something of a revelation. The backdrop is ingenious too, with Benji’s clunking banjo setting a wearily plodding yet curiously jaunty pace and reminded me of the Steptoe & Son theme. Back with the ballads, and the album’s midway point is marked by a typically imaginative, epic Steeleye treatment of another of these – Child #36, Mackerel Of The Sea, a kind of companion-piece to Alison Gross (another memorable Steeleye essay) and sharing the time-honoured shape-shifting theme. Follow that! I hear you cry – but Steeleye do so with a fabulous take on another key narrative, The Cruel Ship’s Carpenter, which in addition to some gloriously swooning prog-style guitar and violin work also features a fine Benji vocal.

The band changes tack completely again for the next track Domestic, which gets into the customary bouncy Hat/Quo boogie stride for a portmanteau conjoining of two trusty (and fun) traditional man-and-woman relationship songs which address male inadequacies – first the tale of hapless John Hobbs who sells his wife, and second the famed My Husband’s Got No Courage In Him (which Maddy first sang with June Tabor in Silly Sisters guise). Delicious! The CD’s final tracks then serve to wind the pace down somewhat. Roadways is lovely, a calmly pointed Sinclair setting of John Masefield’s metaphorical 1910 poem of that name whose poignantly romantic mood (and theme) is perhaps rather reminiscent of Somewhere Along The Road, this forming a neat bridge to the CD’s final track, Reclaimed. This beautiful song, in the form of a salutary warning to humankind, was written by Maddy and Rick Kemp’s daughter Rose-Ellen for the second Stones Barn CD, but (saith the booklet note) subsequently “nicked for Steeleye”, I’d guess to showcase the unadorned vocal strength of this band’s current lineup, utilised to the full on this intricately harmonised a cappella arrangement that brings the whole CD round full circle to the voice-only mode with which it began its rich Harvest of music. Arguably the only drawback to this gorgeous finale is that it’s sometimes difficult to prise out the melody from the harmony lines…

So – a fitting celebration of all that’s prime Steeleye. All good for another 50 years then!…