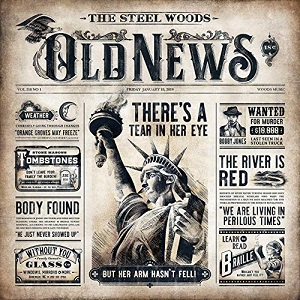 
Built around the songwriting partnership of th Wes Bayliss and Jason Cope, and bolstered by Jay Tooke and Johnny Saunton providing the rhythm section, this is classic southern rock in the tradition of the Allmans, Skynyrd, ZZ Top and the Black Crowes with a dash of Petty for good measure.

As such, you'll know to expect swaggering guitar riffs, chugging rhythms, drawled vocals that meld blues and country and songs that treat on women, booze and death, laying down the template with the bulldozing opener 'All Of The Years', consolidating matters with the slower, more countrified soulful sway of 'Without You', a tough love call to get yourself together and move on from a broken relationship as, in his slightly gummy-drawl, Bayliss sings how "you gotta bury that dream…..you better get on with your life before life gets on without you."

The first of six covers, Black Sabbath's 'Changes' would seem an unlikely choice, but the band dig into its core to extract an Al Green inspired country soul ballad, and then it's back to a run of originals, kicking off with the sparsely arranged, vocally cracked 'Wherever You Are', the song gradually building in power as the drums and tolling electric guitars scaffold the mid-section.

'Blind Lover' is heads down, riff-driven Crowes boogie, the Faustian bargain murder/cheating storysong 'Compared To A Soul' more akin to a ZZ slowburn before comes the anthemic title track centrepiece, a piano-led state of the nation call for unity and to focus on the thing we have in common as Bayliss sings "I'd hate to think that you'd think I hate you, I'd hate the thought of you hating me too."

Save for the towering six-minute plus 'Rock That Says My Name', a cemetery-set Ozymandias-like meditation on mortality, the remaining tracks are all covers, homages to Southern artists who have passed away in recent years.

Townes Van Zandt's frail and vulnerable 'The Catfish Song' gets a stomping makeover with wailing harmonica and barroom piano while 'One Of These Days' is a slide and steel-led Willie Nelson-like country waltz musing on achieving your dreams before you die by Alabama's Wayne Mills. Two contrasting southern icons are celebrated with the pedal steel, honky tonk sound of Merle Haggard's politically-fuelled timely nostalgia 'Are The Good Times Really Over (I Wish A Buck Was Still Silver)' while 'Whipping Post' is a faithful if not even darker and moodier version of Greg Allman's classic molten southern blues rock rumble.

It ends with a tip of the hat to Petty, on a stunning cover of 'Southern Accents' that could easily be run up the flagpole as the album's manifesto. It may be old news, but there's not a fake note here.