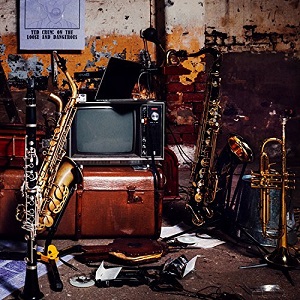 
Sometimes, it takes a while for a band to become something more than just a name that you have heard somewhere. For me, one such band is Steamchicken, I had been aware of them as a name on festival websites or on gig guide pages but, until now, have not had the opportunity to discover their music.

Look both ways is the band's latest album and encompasses a variety of styles and genres ranging from Gospel to Jazz, Folk and Ska with a mixture of original and traditional songs that are by turns rocky and reflective.

Steamchicken may use the word Ceilidh in their description of themselves but right from the start it is evident that Steamchicken are a ceilidh band like no other, with a horn section and a sound that complements Amy Kakoura's voice perfectly

One thing that impressed me about Look Both Ways is that each track is not just a song but a piece of Musical Theatre, whether it is a biblical tale such as Jericho and O Mary, Don't You Weep, Ella Fitzgerald's joyful song of defiance against hard times When I Get Low I Get High or Western Approaches, the band's own tale of a night riding out an Atlantic storm, the stories in the songs being effectively conveyed through arrangement as well as the delivery.

For me, the standout track on Look Both Ways is Gypsy, an original composition that takes the story of the Raggle Taggle Gypsies and turns it around to give the Lady's point of view. The combination of the words, the sultry arrangement and Amy's voice all serve to convey the hope of a new life with her lover tinged with regret at leaving her former one, no matter how suffocating it eventually became.

Look both ways is a musical tour de force that reflects the live ceilidh experience, jam packed with songs that defy you not to get up & dance around your living room, interspersed with more reflective interludes that give you a chance to get your breath back before the music gets you back on your feet & dancing.

This album has a predominantly jazz feel but don't let that put you off, Look Both Ways is a joyful listening experience that will leave you with a smile on your face and a spring in your step. In a world where mainstream musical success seems to be predicated on winning a TV talent competition this is a release that deserves the widest possible audience. If more people listened to Steamchicken, the world would be a much better place.

When I Get Low, I Get High