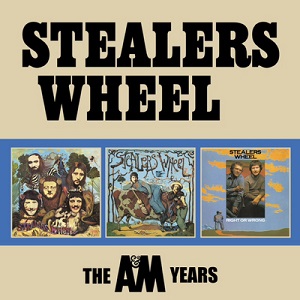 
The ’70s band Stealers Wheel is famously one of those one-hit-wonder outfits that characterised the fickle pop charts during that decade – their 1973 hit Stuck In The Middle With You will be known to everyone on the planet! (Not least from its revival in the most unlikely place – Tarantino’s 1994 movie Pulp Fiction …) But the band was responsible for much more good music, and had a rather complex and chequered history. The liner note to this box-set states it fairly succinctly: “Stealers Wheel began life as a quartet, then a trio, became a group, lost its leader, re-formed and then finally slimmed down to a duo before imploding amid bitterness in 1975.”

Stealers Wheel ostensibly was the duo of Gerry Rafferty and Joe Egan (Glasgow boyhood friends who’d drifted apart then came back together after the dissolution of Gerry’s Humblebums duo with Billy Connolly), augmented initially by singer songwriter Rab Noakes and guitarist Roger Brown. The latter two musicians left, in summer 1972, and the remaining core duo recorded an album with the help of extra musicians (Paul Pilnick, Tony Williams and Rod Coombes) and no-expenses-spared production by the legendary Leiber & Stoller. It was a collection of classy pop songs on which writing credits were almost equally shared between Gerry and Joe, with joint credit for four of the songs. Gerry’s special vocal sound provides a distinctive signature on a majority of the tracks, while the vocal interplay between Gerry and Joe is a key element of the arrangements. Opener Late Again even features a pre-echo of Baker Street with its florid sax solo. And of course, the final track, You Put Something Better Inside Me, has since been covered by Rod Stewart and countless other artists. But by the time the hit single arrived, Gerry had left the band (temporarily), though he was persuaded to return… Confused? Me too.

So on to November 1973, and Ferguslie Park, the band’s second LP, named after a particularly deprived area of Paisley. On this record the band was to all extents and purposes reduced to the core duo backed by an assortment of session musicians. It appears that all manner of artistic conflicts ensued between Gerry & Joe on one hand and Leiber & Stoller on the other – and yet the resultant LP was actually another solid collection of open-hearted pop songs that any band would’ve been proud of, notwithstanding a certain measure of over-production at times. The album was released in 1974, but despite its musical quality and distinctive, stylish artwork (by Gerry’s childhood friend John Patrick Byrne) it sold poorly. The third Stealers Wheel album, 1975’s Right Or Wrong, was a good example of a contractual-obligation recording, and like many of its ilk it polarised critical opinion; but it undeniably contained some strong individual songs. It again featured a panoply of uncredited session musicians, but with less of a tight group sound and more over-orchestration. Right Or Wrong was a commercial disaster, though, since its well-crafted pop was against both prevailing and upcoming musical trends and tensions between Gerry and Joe were growing; so it made sense to call it a day then and there.

This three-disc box collects together all three original albums, plus a sequence of three bonus tracks that pre-date the first Stealers Wheel LP. They were recorded for a BBC Live In Concert programme in December 1971 (where they supported Rab Noakes and Lindisfarne), and comprise first-album song I Get Ready and good-time rollicking arrangements of two erstwhile Humblebums songs, Please Sing A Song For Us and Steamboat Row – the latter revisited for the Ferguslie Park LP. It’s certainly useful to have all the Stealers Wheel catalogue available under one roof (although it might arguably have even better fitted onto just two discs!).

You Put Something Better Inside Me