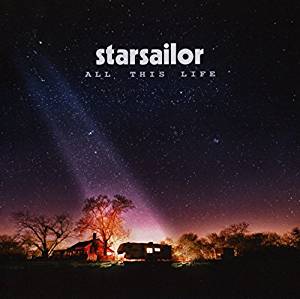 
Starsailor were one of those bands that arrived in the post-brit pop era, with the likes of Stereophonics, Travis and Feeder. Their set at Glastonbury 2002 got them a lot of well-deserved attention, and songs like Lullaby, Alcoholic and Four To The Floor only increased their popularity, leading to gigs supporting the Manic Street Preachers and Doves. They went their separate ways in 2009 after releasing All The Plans, and while the band came back together in 2014, this is the first album they have released in over eight years.

Albums like this can be a tricky proposition. Does the band stay cautiously close to their original sound, or do they go for something a little different and risk alienating the fans. Remarkably, Starsailor have managed to do both. Songs like Take A Little Time and Caught In The Middle represent a bit of a departure for them, but there are still tracks on here that feel very much like Starsailor songs. Listen To Your Heart was the first release, and it's a typically anthemic crowd pleaser that would go down well with the festival crowd, not too dissimilar to their classic hits.

While the first three tracks are the first singles released, it's the middle of the record that should get the most attention. Sunday Best, Blood and Best Of Me are fantastic tracks. Sunday Best starts with a pared back beginning that concentrates on James Walsh's vocals, but builds and builds to a soaring crescendo. Blood has an emotional ambiance to it, and Best Of Me is a rollicking rock track in the vein of U2 meets the Manics. It's a track you'll keep coming back to, and it will echo around your head long after the album has finished.

While Starsailor may not quite have the name recognition of some of their peers, it's great to have them return in such good form. This isn't an album cobbled together for the sake of getting new material out. All This Life may not be an instant classic, and it's unlikely it will hit the heights of Love Is Here or On The Outside, it's still a damn fine record that should win them many new fans, as well as pleasing their loyal fanbase.

Listen To Your Heart