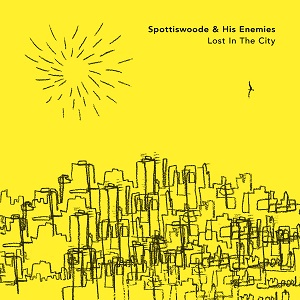 
I doubt whether there has been a more eclectic recording reviewed by FATEA this year than Lost In The City, the latest offering from Spottiswoode & His Enemies, the New York band fronted by Jonathan Spottiswoode, who is credited with writing all songs on the album too.

This, their seventh release, was nominated as 'Best Contemporary Album' and 'Best Acoustic Song (I Don't Regret) in the 2018 Independent Music Awards, whilst winning the 'Best Producer of an Eclectic Record' category. Serving up a heady brew of sublime chanson/cabaret, jazz, blues, rock and even vaudeville, this ambitious song cycle of some 18 tracks also marks the group's 21st anniversary.

As he reveals his vision of life in New York City, he succeeds in capturing perfectly the mind-sets of those from the Big Apple of whom he writes with a consummate skill which belies his English heritage. With stories and tales, some seemingly autobiographical, covering the gamut of emotions, with love, loss and guilty acknowledgement of personal failings being addressed with a frank honesty, Spottiswoode's lyrics, often sardonic, and witty, compare favourably with the likes of Harry Chapin and Randy Newman, he is that good.

Musically, his regular six-piece His Enemies are as tight a unit as you could wish to hear; add to this the fact that on some songs the sound is augmented by strings or a beefed-up horn section, and the result is an aural tour-de-force.

With opening track 'Hoboken', lyrically a straightforward description of a reflecting-on-my-life walk through the city, written from an autobiographical first-person perspective, the dynamics of the song build from initial strings and piano accompaniment alongside Jonathan's voice, to a crescendo that is symphonic in its scope, thus an ideal overture to the rest of the album. On the title track, the jazz-infused brass and the glorious keyboard playing of Tony Lauria provide a perfect platform to allow Spottiswoode to display what a tremendous voice he possesses.

Further autobiographical observations, if my interpretations are correct, include 'Because I Made You', and the admission of blame for failed relationships in 'Now Didn't I?', with its jaunty samba-rhythms, and the gentle, moving self-reflection of 'It's On Me.', although the final stanza here might leave one wondering whether the remorse is truly felt.

The humour underlining 'Love Saxophone', spoiler-alert, no metaphors were harmed in the recording of this song, should not detract from the actual sax contribution made by Candace DeBartolo. 'The Walk Of Shame', reflecting on loneliness "You're lonely and you can't pretend You're pretty anymore", and 'Goodbye Jim McBride' recounting the funeral of the titular hero, which morphs into a finale recalling the female vocals of a Humble Pie-era Blackberries, provide contrast, whilst other highlights include 'Tears of Joy', 6minutes 35 seconds of pure class, the chorus of which, inexplicably suggests Osibisa and 'Batman And Robin', a smoky, trumpet-led number centred around driving children between separated/divorced parents over a weekend.

The poignant closer 'I Don't Regret', with its 'I don't regret, no I don't regret my sordid life, It's been a miracle, and I saw the light, I saw light' provides a nigh-on perfect ending to the recording, possibly supplying the largest jewel in this collection of gems.

Lost In The City is a rewarding and thoroughly absorbing release which warrants full investigation and deserves success.

Finally, as a side-note, it is to be hoped that even though 'Humpty Dumpty' doesn't feature on the album, Spottiswoode's little daughter is nevertheless impressed.