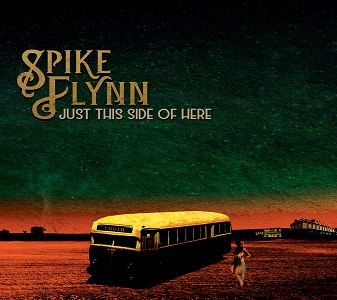 
Originally from a smalltown New South Wales and now based in Sydney, Flynn's a significant figure on the Australian country scene, this being his third album which he describes as songs about, among other things, country town life, the Tibetan Book of the Dead and mystical moments.

Drawing on such influences as Doc Watson, Guy Clark, Townes Van Zandt and Dylan, possessed of a cracked vocal delivery, Flynn's an accomplished finger style guitarist and plays 'rack' harmonica, accompanied here on double bass, slide guitars, cello, fiddle and flugelhorn, things kicking off with some string band swing on the goodtime 'Like A Breeze'.

His semi-talked storytelling approach makes its first appearance with the memories of 'Minstrel Man', the narrator recalling he and the title character singing their songs by the railway track, reading Alan Watts and Neitzsche before they went separate ways, a letter telling him his old friend finally settled down with his hometown girl. This is followed, in turn, by the slide backed tale of 'Father O'Connell', an aged Irish priest "alone in his room/Thinking of redemption, thinking of tombs", looking back on his life and choices made.

Indeed, most of these are narrative songs, from the redemptive power of love in the parched folk blues 'Incident In The Stony Desert', the jaunty fingerpicked ode to travelling musicians 'Blue Eyed Boy', to the vignettes of regret ("If I'd stayed in that north-west country town/Maybe I'd own me a pretty wedding gown…Instead of trading my heart with these dark eyed men/Dancing in circles so it all starts hurting again") and goodbyes sketched in 'North West Country Dance Floor' with its sad refrain "How many times can the music end/With a broken heart your only friend?"

The centrepiece though is the ten and a half minute 'Hey Girl', a simply strummed story of love lost ("That day you got on the bus my head froze I just wanted to scream"), dreams broken with time ("One day you look in the mirror and find nothing's the same") and heart bruising reunion ("It's been too long but not so long that I don't care"), as, in cracked and gravelly tones, he sings how "You pack your bag, you make your bed/To find hell's just a place inside your own head" and that "The heart desires completion, but life rarely flows that way".

It's not all so downcast though. Opening with lonesome harmonica and with slide guitar howls, the nine-minute 'Smoke At The River Bend' finds acceptance as it again speaks of loss but also of the curls of smoke seen as a metaphor as "Like life it dissipates, then curls back on itself again" and that "We stumble through this landscape grieving with just a bed-roll and a prayer/To find that grief's just an illusion, it doesn't lead us anywhere" and reminds to " Let compassion stand guard, by each and every door/Act with forgiveness, as your dreams roll and tumble 'cross the floor".

It ends with a note of reassurance amid the storm and the darkness in the gently picked, slide-caressed Dylanesque-toned 'You're Going To Get Through' with its observation that "Wouldn't be no rock and roll darling/If it weren't for the blues/Wouldn't be no direction home/If there weren't wrong turns" and a call to "trust your heart" and the comfort that while "Fate plays its games…love's the referee".

Perhaps best summed up as an Australian answer to Chip Taylor, this side of here is a great place to be.