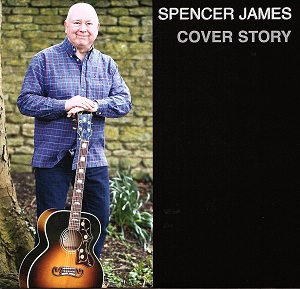 
Spencer James commenced his solo career in April 2019 having spent more than 33 years as lead singer of the 60's band The Searchers. The founder of the band, John McNally, along with long standing member Frank Allen had decided in 2018 that they should take a well-earned retirement after nearly 60 years of making music and travelling the world, commencing in March 2019, so Spencer decided to go it alone. Since then he has performed a number of solo shows and this new CD provides a taste of what attendees to a show can expect from this multi-talented singer and musician.

The title of the new CD is "Cover Story," so as you would expect the album contains a number of reworked Searchers' live performance songs plus a number of covers from other major artistes. One of these, the ever popular Searchers' concert song "The Rose" now includes a piano and cello which takes the song to a whole new level.

"Cover Story" could be viewed as an anthology of modern music, travelling as it does from the late 50's to recent times, revisiting songs and artists from bygone days. Older music fans will recognise the newer cover versions of songs by Bobby Vee, The Drifters and Jonny Tillotson. All have been given a fresh new makeover with Spencer's superb vocals. A Spencer version of Nick Lowe's "Cruel To Be Kind" is included too, bringing along the sound of the late 70's.

Fans of Country music will appreciate Spencer's versions of Keith Urban's "Grace Of God" and "Every River" from American duo Brooks & Dunn. It is in this genre of music that Spencer excels as his voice is perfectly suited to Nashville and the story telling of this brand of music.

My wife and I saw a Spencer solo gig recently and his voice is as good live as it is on a recording. He has a rich tenor voice with a very wide range enabling him to sing almost any style of music. Having seen The Searchers on a number of occasions, my wife's favourite song from both the band and solo Spencer has been the cover version of the Allies "Somebody Told Me You Were Crying" although on the cover of the new CD, the title is somewhat abridged, presumably to save room on the sleeve. This is a truly wonderful ballad beautifully delivered by Spencer.

I am sure that Spencer will have reservations about his future without the security of the band behind him, but on the basis of this new CD and his live performances he has no need for concern. His superb voice will see him make a new successful career for himself and, in the process, gain many new fans. A singer for all times!

From Time To Time