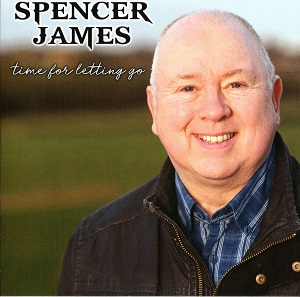 
Spencer James came to the music public's attention in 1974 as part of the one hit wonder band, First Class with their only single success "Beach Baby." A genuine jobbing musician he then appeared in a number of bands up until 1985 when he was approached to join the 60's band The Searchers. Little did he know that he would still be with the band in 2018!

Despite constantly touring with The Searchers, Spencer has found time to record four albums at his own studio over the years and his latest offering "Time For letting Go" has just been released. This comes at a time when the band has decided to call it a day in 2019 so Spencer is preparing for life after this.

Spencer's music is a mix of rock and country, the latter being perfectly suited to his voice and his somewhat languid style of delivery. Many of the tracks on the latest album have been written by Spencer and all have been recorded and produced by him at his own studio. He is not only a superb singer but a master on the synthesiser guitar and a keen collector of guitars. Fans of The Searchers will already be aware of his vocal prowess but may not be familiar with his solo work. If that is the case they should rectify that with immediate haste.

Here is a singer who would be equally at home in a large music venue or the Bluebird Café in Nashville. He has a wide vocal range delivering lyrics that are both easy to listen to and understand.

The title track of the album "Time For Letting Go" provides an excellent vehicle for his vocals with a strong country feel to it. It is followed by "Naked To The Pain" which slows the pace right down with its delightful yet simple piano backing. Thoughtful lyrics delivered by Spencer's silky smooth voice.

Primarily influenced by country music, Spencer can also deliver middle of the road music which is demonstrated on this album by versions of Stevie Wonder's "I Just Called To Say" and Bonnie Tyler's "It's A Heartache." I must confess to not being too keen on the former but really enjoyed the latter which is delivered with some panache. Another superb track on the album is "All I Wanna Do" which is not to be confused with the song of the same title by Sheryl Crow.

So, as Spencer's career with The Searchers comes to a close (in March 2019) he has the opportunity now to spread the word of how good he is as a solo act. Fans of the band and country music will no doubt lap this album up as I did. From first to last track it is delightfully delivered by a supremely talented musician and singer.