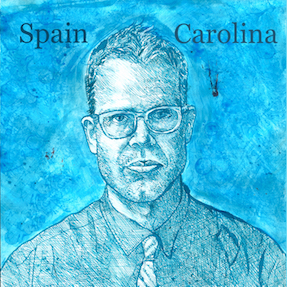 
The follow-up to 2014's "Sargent Place", working with multi-instrumentalist Kenny Lyon, this is the first release since the passing of singer-songwriter Josh Haden's jazz legend father Charlie, so it's no surprise to find it imbued with songs of loss and reflection, ploughing more of an Americana path than the slowcore of their earlier days.

Saying that, the only obviously personal track is album closer "Station 2", a spare, five minute bluesy reminiscence of his childhood in Malibu from whence comes the album's titular character. Otherwise, these are stories often drawn from history. Set in 1875, "Tennessee" is a slow, moodily acoustic number that spins the story of a homesteader and his family displaced by powerful landgrabbers ("Mrs McAllister said "Here's my bed"). According to Haden, the story continues with the man's great-great-great-great grandson stealing the wife of the cattle baron's great-great-great-great grandson and heading for the Missouri line in a Maserati 155, the husband's posse in pursuit, though you'd be hard pressed to spin that from the lyrics.

This, in turn, is followed by the equally dark, weighed down acoustic blues "The Depression" and how it ruined so many lives when the market crashed in the 30s, and draws inspiration from his grandfather who were forced to temporarily quit their upstate New York farm, returning to find the family dog had escaped from the kennels and frozen to death waiting for them.

The Neil Young-like "Battle of Saratoga" mixes the late-60s story of a jazz musician being snowed in after a show trying to get home on Christmas Eve and suffering heroin withdrawal with an account of the 1777 battle, a turning point in the War of Independence, the failed attempt by the British to take Bemis Heights and its scorched earth retreat. Meanwhile, on a more recent note, "One Last Look", featuring sister Petra on violin, is inspired by the 1968 Farmington Mine Disaster which led to a revamp of mining regulations and miners' rights.

Away from the history books, the dreamy drum-less "Apologies" harks to him winding up at a wake for Timothy Leary in 1990s Beverly Hills and seeing the girl from a dating ad he'd inadvertently stood up the day before. Shifting styles, the desert noir feel of "Lorelei" is about ,trying to quell conflict on a relationship level ("I don't want to fight your wars tonight") while a riot unfolds in the street below, "Starry Night" addresses the aftermath of a woman coming home to find her boyfriend's not alone (though it does seem to suggest an eventual reconciliation), "In My Hour" is a muted country hymnal with Mother Earth calling on LA for redemption and "For You" a slow burn bluesy declaration of dedication.

The stories behind the lyrics aren't always obvious, but if that makes you listen to the songs more intently and immerse yourself in Haden's heady brand of alt-country, then so much the better.