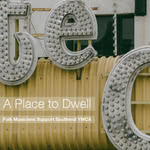 
I'll come straight out and say that this new compilation deserves your attention on all counts. Not only does it support a pretty vital cause (an amazing local charity that clearly does way more than it says on the tin), but it's also stuffed full of great music from the top-drawer of the cutting-edge of the current alt/experimental-folk scene - much of it specially recorded for the occasion. And the whole project had been masterminded and curated with love and expert knowledge - by Diana Collier (singer with the much-missed Owl Service and wife of Leigh Folk Festival supremo Paul Collier).

Anyone with even half an appreciation of the alt-folk sub-genre will be eager to get their ears round any album that features Alasdair Roberts, Sharron Kraus, Alex Neilson and Nancy Wallace, and the disc also contains some other only slightly less familiar names - Robert Sunday, Lost Harbours and M.G. Boulter, to name but three - while others will be fresh discoveries to the majority of listeners I suspect. But there's abundant variety of expression amongst these entrants, and each one is instantly appealing in its own way. Nancy Wallace's beautiful Yellow Tail, Robert Sunday's limpid Romy and M.G. Boulter's His Name Is Gene are both intimate and sparsely scored, while Alasdair Roberts' account of The Little Collier is all the more telling for its simplicity of setting and its underplaying of the harrowing lyric. Opening the compilation in style, we find Alex Rex (Nielson), backed by Lavinia and Steve from Trembling Bells, performing his own composition The Gift Of Weeping which exudes a curiously ornate compassion in its deceptively sweet-toned musical setting.

The duo Crafting For Foes (Amanda McManus and Adam Rees) give their cryptic brand of acid-folk on The Spin, and Cunning Folk have donated their atmospheric ley-line-themed song The Old Straight Track (from their Ritual Land, Uncommon Ground album). (I may be mistaken, but the latter is the only track on this compilation that I'm certain has been previously released elsewhere.) At the other (more overtly traditional-style) end of the folk spectrum there's Sharron Kraus's life-affirming a cappella piece Hearts Joined As One, which takes its cue from the familiar rousing chorus song Let Union Be (When We Are Together); here Sharron is joined by massed voices whose ranks include Fay Hield, Jon Boden and Paul & Liz Davenport, and the track makes for a feelgood, positive disc finale.

There's also a handful of instrumental tracks, also of considerable diversity. Nick Pinn's rustic dance Feu De Joie is followed by a tune by Kate Waterfield and Charlie Skelton; in contrast, Circle/Temple's cryptically-titled I Possibly Am Again builds its eerie soundscape around a rich drone and wordless plainchant, while the more minimalist ethic of brazil banks' darby makes for an ambient creation that's perhaps more difficult to assimilate.

The compilation is well presented too, with an attractively crafted handmade quality to the package and no skimping on due credits. Diana is to be heartily congratulated on her enterprise in getting this together, and so, if there's any justice, this excellent compilation will raise shed-loads of cash for its cause.

A Place To Dwell is available in CD format at £10 and digital download at £8, from the link above. There's a launch concert at Southend on Friday 22nd June.