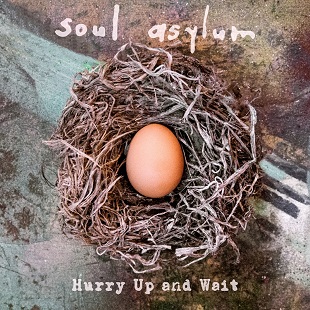 
Their first new music in four years, the title, nothing to do with Blondie or The Stereophonics, refers to not rushing to get things done and then finding there's still things to be completed before you can progress. In other words, take your time and ensure the end result is the best it can be. Well, that applies here, an album that sees Dave Pirner and the gang mixing up punchy alt rock with more keening Americana, the latter first out of the stall with the aptly titled moving forward-themed 'The Beginning' and its abrasive opening riff before settling into a summery flowing chug as they talk of setting out on a great adventure.

That seems a fair summation of what follows, heading first into the chiming chords of 'If I Told You' and then the drum battery intro to 'Got It Pretty Good', a driving 90s blues rock stomp of a number with some searing guitar work carrying it across the bridge. 'Make Me Laugh' shifts to the poppier side of their brand of alt country with a strong supply of air punching peaks, delving back into the noisier end of the pool with the psychedelia Beatles-influenced 'Busy Signals'.

Things slow and get calmer for the steady chug of 'Social Butterfly', a song that nods to the fact none of them are getting any younger, and the sparse arrangement of the funeral march-paced and lyrically sombre 'Dead Letter' with its acoustic guitar and trad folk feel.

As you might expect from the title, 'Landmines' is more explosive as Michael Bland's drums again provide the driving force on a dirty blues that's part Zep part Diddley. 'Freezer Burn' is another riff hammering track, sandwiched between the more 12-string jangling 'Here We Go' and the cascading chiming chords of 'Silent Treatment'.

They end with, first, another bounce around the stage with the punky 'Hopped Up Feelin'', another number where the title provides the description, and, finally, the 60s folksy pop rock post break-up self-recriminations swayalong of 'Silly Things' where, of all people, they call The Proclaimers to mind.

The cover shows an egg in a nest waiting to hatch. Crack it open and let it fly.