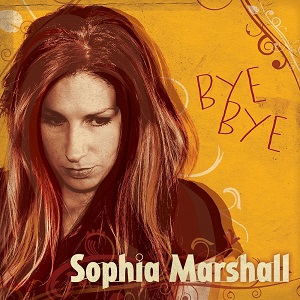 
Formerly one half of Americana group The HaveNots, and after almost a decade supporting other singers, Sophia Marshall releases her debut album, Bye Bye. Having performed with the likes of Evan Dando, The Sadies, and Tift Merrit, both in the UK and the US, Marshall launched her solo career in 2015. Bye Bye finds its roots in Americana, but gives it a 90s spin, with a few indie and trip-hop elements thrown in.

The album starts with an upbeat pop vibe, with the title track proving a gentle but catchy introduction. 'Losing You' was written with former HaveNots partner Liam Dullighan, and is perhaps the most conventional track on the album. Certainly the catchy refrain takes some time to remove itself from your brain afterwards. While it’s a good song, it’s not typical of the rest of the album with the twists and turns that the other tracks take.

Marshall’s not so secret weapon is her voice, full of strength and yet delicate and tender at the same time. 'Flares' is a particular highlight, full of fragility but utterly enchanting. 'Hey Al, Woah!' is full of defiance and potency, forceful in the assertion that no means no. Both are excellent showcases for Marshall’s vocal skills.

'Bye Bye' is a short album, not more than half an hour in length across its nine songs, but it packs a lot into its meagre running time. This is an assured work and is full of lush melodies and captivating vocals. This is a great debut album and hopefully there is much more to come from Sophia Marshall as a solo artist.