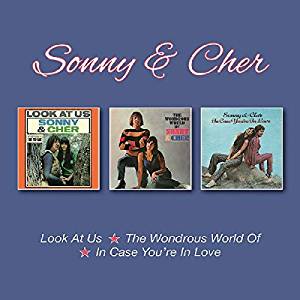 
Sonny & Cher were pop’s “It” couple of the mid-’60s, but they were no mere hastily-flung-together opportunist cash-in act. They’d both been around the scene for a while by the time they came to prominence with their chart-topping single I Got You Babe. Salvatore “Sonny” Bono was a Specialty Records songwriter and Spector protégé who’d already written songs with Jack Nitzsche (remember Needles & Pins?), and he’d teamed up with Cheryl LaPiere (née Sarkisian), who by then had sung backup vocals on several classic Spector recordings. But they’d had no success in the States as Caesar & Cleo, and it was only after rebranding and visiting England in the whirlwind days of 1965 that things began to happen for them (and spectacularly so).

Both were strong and very competent singers, with appealing voices that sounded well together, which of course helped – as did their image-friendliness: ideal icons. They made three albums together, plus a clutch of singles, and both carried flourishing solo careers outside of the duo. So this exhaustive three-disc package from BGO goes a long way towards enabling a reassessment of their duo output over those heady years. It presents the three albums in their entirety plus a whole disc of bonus tracks comprising the complete Atco-era A- and B- sides. (Perhaps this paves the way for a reissue of Cher’s solo releases on Liberty?)

It’s a bit of a shame, then, that the albums display the tell-tale signs of “rushed job” assemblages, containing mostly cover versions – albeit from an eclectic and mostly tasteful range of material. Their first LP, Look At Us, recorded and released hotly in the wake of that no. 1 single, was a decidedly Spector-influenced collection including such popular numbers as Unchained Melody and Then He Kissed Me as well as a taking in R&B/Motown (You Really Got A Hold On Me), folk (500 Miles) and blues/rock (It’s Gonna Rain, You Don’t Love Me), with a dubious foray into breezy euro-chanson (Sing C’est La Vie). The musical arrangements were respectable, refreshingly not aping the overblown Spector style and sometimes moving towards the jangle-pop vibe, while (unusually) the LP’s liner notes named and credited key participants within the session and production crews.

The swift followup Wondrous World Of… LP proved generally to be more of the same, but both more cohesive and with an arguably better selection of material, albeit again predominantly covers (just three Bono originals). A number of the tracks sported identikit Babe-style arrangements (the usual “formula sound” accusation might be levelled, I guess), but on cuts like What Now My Love?, But You’re Mine and I Look For You it did at least make for a kind of signature sound and the whole affair was a pretty likeable, if not exactly musically trail-blazing set.

By 1967’s In Case You’re In Love, the duo’s third LP, there was more of a feeling that they were becoming out of step with the emerging psychedelic trends, but at least the album contained a brace of hit singles – The Beat Goes On (sic!) and Little Man, two of the LP’s six Bono compositions. All but one of these (the dire carnivalesque hokum Podunk) rather overshadowed the album’s high quotient of covers (which veered between ingenious settings – eg Tim Hardin’s Misty Roses – and routine filler). The vogue-ish commercially-accessible brand of mild exoticism that stretched from Little Man to Love Don’t Come had around that time given Cher a solo chart success with Bang Bang, you’ll recall. Finally, the third CD in this package is a convenient gathering of the various singles made by the duo between 1965 and 1967 for Atco/Atlantic. By its very nature this is bound to be a musically uneven collection; there are some real curios (like Plastic Man and a rocksteady/ska take on Love Is Strange), and even a “what shall I put on this B-side?” discussion!). But this third disc satisfyingly completes the picture as regards the duo’s Atlantic/Atco output. So, this set’s a definitive package and both listenable and in the end perhaps unexpectedly consistent. It’s handsomely presented in best BGO tradition too, complete with substantial booklet essay.