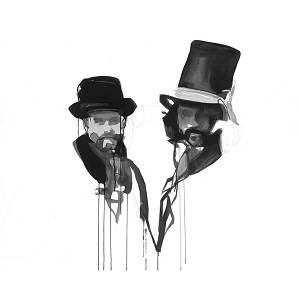 
Something of a conceptual affair, David Berkeley and Ben Parker have named themselves and their debut album after a junk raft that made a Transatlantic crossing in 1998, built by New Orleans musician William David Pearlman aka Poppa Neutrino. Furthering the idea, the pair have crafted an entirely fictitious backstory which sets the crossing back in 1904 and casts themselves as a pair of Victorian adventurers embarking on the voyage, even to the extent of designing an accompanying spoof article from The Illustrated London News detailing their exploits, on the reverse of which is their account of making the album, written in the same style.

It's an inspired playful conceit, but it would be redundant if the music didn't measure up. Which it most certainly does. Featuring Nickel Creek's Sara Watkins on fiddle along with strings, brass, drums, piano and accordion as well assorted crowd vocals that include Carrie Elkin, Robby Hecht and Danny Schmidt, it opens briefly with Ship's Harmonium, the titular instrument played against a backdrop of the sound of the sea, before the slow, melancholic harmony sung sway of 'St Christopher' as the adventure begins ("…there is a world, and it calls me out. It beckons and begs, and starts to shout/And I don't know why I can't sit still/Like telling the waterfall not to spill"), despite the narrator's attempt to resist the call of the sea and remain with wife and son.

"He was in the washtub/And then he went to war" so, begins the S&G-like 'The Line Between', a song that, coloured by muted brass, ponders the impossibility of trying to make sense of things and just getting on with life as they sing "Out of all the questions the hardest one is why, so we don't even ask. Just close your mouth and kiss me and time will pass us by, and you and I will last."

|As you'll gather from the title, opening unaccompanied before the acoustic strum begins, 'Poseidon' returns to the sea with both all its fury and its calm, a brass burnished hymn to those who venture the waves and the songs of survival, the thanks given for those made the crossing ("The songs of our fathers, the songs of the sea, when they crossed the water we fell to our knees"), at times reminiscent of Darlingside.

A similarly low key arrangement between brass and acoustic guitars informs the world wearied 'To Breathe Is To Burn', a wonderful song about faith and rising above the trials and tribulations, and, "when you're sinking in the deepest of waters" and "you've seen more than is meant for a man", knowing that "There's a fire and it's burning. That is life it's what we're learning. In the end all but love turns to ash." Basically, it's their 'Let It Be'.

The buoyant strummed rhythms of 'California' are rooted in the often blind hope that sent prospectors out into the 'holy land' in search of gold and the prospect of building a new life for those they left behind, Watkins stepping into the spotlight to bring it to a soaring conclusion.

Again starting out with a capella harmonies before guitars and shimmering strings arrive, 'Cobbler's Hill' traces a love story down the years, a married couple looking back to their youth and falling at first sight, but too shy to act on their feelings, wistfully reflecting on lost years and taking the long way home, but acknowledging that "you never left the frame".

By contrast, the bigamist in the playful swayalong 'The Man With Two Wives' clearly wasn't backward in coming forward, although, playing out like a cautionary folk tale, caught between the older wife with a "face like a drought in July" and the younger, "red-lipped, raven-haired/Curves like the hills of San Juan", as they argue the toss, it's no surprise that his hair turned white as the moral lesson is that more is not always more and "at the end of the day/You'll be battered and broke till you die".

Remaining musing on relationships, 'Louise' finds the narrator wanting to mend fences broken by his drinking, temper and unfaithfulness, realising what he's lost and desperate in the hope that something still remains. Lessons learnt are also the engine of the strings 'Morning Fields', an awakening to the beauty of nature, his eyes and heart opened through finding the love of a woman ("I ain't never heard music…till I looked in your eyes") , the counterpointed vocals back referencing 'Cobbler's Hill'.

With a clever spin on the final word of the repeated refrain, Holes In A Western Town sketches another story of a man brought low to"horseshoes and hand me downs", how wine and women leave him empty, recalling how his grandfather stole from his father ("I'm still paying now") as he now sits gambling, hoping for a good hand ("I'm still playing now") and looking for redemption ("come back Maria/I'm bent but not broken…I'm still praying now").

They return to the theme of infidelity and its repercussions, but in more melancholic manner, wistfully strummed and embellished with brass and string for 'The Song You Never Heard', the lyrics building from "one man in a field of plenty/One woman to tempt his eyes" to "two rings to show the union..two hairs still on my tailcoat/You were never meant to find" adding up to "Three hearts to break a heart…three years of being apart" before the hope that the four seasons may complete the circle, turning stones into pearls, its wordless refrain gathering to an anthemic, military drums and trumpet finale. It ends as it began with an instrumental, this time 'Ship's Piano' waltzing away over the horizon arm in arm with sweeping strings, a perfect end to a most wonderful adventure.