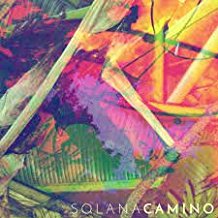 
Solana is described as a “polyrhythmic world-folk group”; its eight-piece lineup brings on board a number of distinctly simpatico musicians who are all active on the local music scene around Bristol where they’re based. I can find out nothing about their background beyond the fact that they formed back in 2012 as a trio, so evidently the rolling stone gathered plenty of moss in the subsequent five years, certainly the current crew sounds as though they’ve worked together for a while and perfectly comfortable with each other’s musical creativity.

The principal melody line input comes from Tamsin Elliott (flute, accordion) and Rowen Elliott (violin), with further tasty input as required by Spanish and electric guitars (Alex Dickinson and Gummo Clare). Henry Edmonds supplies the solid, dynamic bass groove, while the De Marcos brothers Elio and Lucas provide the busy percussion element. Everything they play is self- (group-) penned, which gives the CD a certain unity and homogeneity, and indeed a group identity, which is a sneakily appealing (and perfectly accessible) world-stew that brings together elements of folk, flamenco, jazz, African, Caribbean, klezmer and eastern-European flavours in one melting-pot that tends to meander along in a pleasing, quite low-key fashion without ever deeply energising or becoming frenetic (but I don’t mean that to sound dismissive in any way of the band’s musicianship or vision). No doubt this makes for a satisfying live experience, and it works well in the home-listening context too where you can focus in and out on different textural delights as the tracks progress. Its impact could be said to resemble that of latter-day East Of Eden, the east-European/Balkan and reggae (and dub) beat but without the bite of Bartók or the heavier edge – and with added mild spice from Latin rhythms (Get Out Of My Way) and Hispano-Celtic essences (Camino Del Agua). I rather like the kitchen-sink feel of tracks like Cheap Nougat too. For there’s a lot happening in their arrangements, both in terms of texture and shape-shifting potential, and perhaps Solana’s biggest selling-point is that the locked-in-but-fluid groove of their music can appeal both to the attentive home-listener and the leaping-about festival-goer. Perhaps largely due to the tight ensemble playing and precisely coordinated natural gear shifts, the constantly shifting musical common-ground is actually less unsettling than it might at first appear, so there becomes no need for any extra element of instant gratification, and the musicians quite rightly feel (and have) no need to prove themselves.

This is my kind of fusion – irresistibly colourful, while retaining the capacity to surprise and delight – in that just when you think you’ve heard it all, you’ll be pleasantly wrong-footed as you wonder what’s going to happen next. The group’s own liner-note for the CD’s final track (Diving) is actually very apt here, with its stated dictum: “When you think you have nothing left to lean on, open your eyes and see you have everything you need to keep going”.