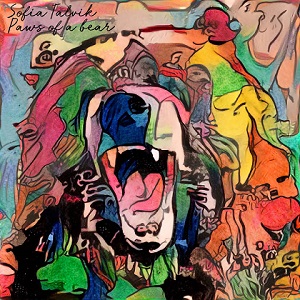 
Things have been a bit quiet on the Scandinavian country front of late, but the Swedish Americana singer-songwriter ends the drought in style with a collection of songs about failed relationships, growing old, wildfires and death.

Backed by strings and pedal steel, the rather lovely wistful melancholia of 'Take Me Home' (home being a recurrent image throughout) eases you in before things get a bit moodier with the hollow drums backing and double tracked vocals of 'Siren Song' and its mediation on striking out and standing on your own.

Lightly fingerpicked, 'California Snow' is a straightforward love song ("There's no place I would rather be right now/Than in this car with you") before the keyboards-accompanied 'Reflections' moves to the transformations of age and getting older as she sings "I look in the mirror/And all I can see/Is my mother's face staring back at me" and how "The dreams I once harboured/Have sailed long ago/Now I'm just fighting on alone". That sense of regret but acceptance seeps over into the road not taken lyrics of the soaringly sung, dobro-backed title track ("If you really wanted you could have broken free/But I guess that freedom was not with me"), here conjuring of words and images in striking form with, set against a "world of lies and half truths", the enigmatic imagination and storytelling conjuring of 'Pharoahs And Friends' ("I will tell you stories about the seven seas/Of monsters and of dragons, heroic princesses/In the enchanted forest I will let your mind go wild") with its evocative line of how "You thought God would be a soldier/But she's just a little child".

The image of wildfires reddening the sky serves as a metaphor for a relationship separated by distance in the slow walking beat of the instruments-swirling 'Blood Moon' ("Where there's a fire there must have been a spark/The road is a dream but I keep on going/because of the fire because of the spark") with its "you're so far away" refrain.

Couched in pedal steel, 'Wrapped In Paper' is another simple love song ("I couldn't find a single item for sale that said I love you the most") before puts a playful spin on the subject with the lightly fingerpicked 'I Liked You Better' as she addresses the problems of being a travelling musician and sustaining a relationship, but also the creative befits as she sings of being "on the road again/Making money singing songs about my old boyfriends" and comes with a put down of her ex and his new lover, "you say she's real smart/But how can she be that/If she's hanging out with you" and that "she can count to ten but that's it I bet".

It ends with a thoughtful folksy song (a hint of Ralph McTell to the guitar perhaps) about choices taken, the nimbly picked, airily sung and string and steel-shimmered 'Die Alone' about choosing not to have children ("I know the clock is ticking and I'm running out of time/But I'm not even sure that I should care") and that "love can come in different ways", rounded out with the philosophical riposte that "Some people say that I will die alone/But isn't that the truth for everyone".

She addresses some of the big questions about life and self with a clear vision and catchy melodies, an album that, excuse the pun, offers paws for thought.