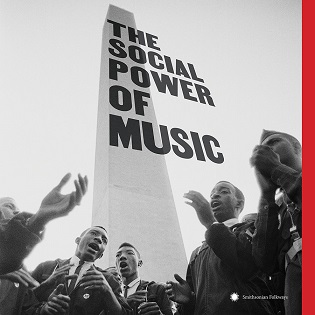 
Once in a while, a release comes along that is so monumental in its scope, and so epic in its content that it renders one incapable of doing anything other than shouting its praises from the rooftops. The Social Power of Music, the forthcoming box-set release from Smithsonian Folkways Recordings, is one such.

Founded way back in 1948, Folkways has both documented and highlighted the ways that song has shaped the societies in which we live, perhaps exemplifying the musical embodiment of Global Citizen author Alllie Kehoe's words 'Music has the wonderful power to transcend borders, bring people together, and serve as a unifying force for positive social change.'

Immaculately compiled by Jeff Place, The Social Power Of Music examines, chronicles and reminds us of the power that music has to potentially change our world through four distinct perspectives, struggle and protest, devotion, celebration and migration.

Thus Disc 1 Songs of Struggle features impassioned songs from American history, many of which are associated with important historical movements, be they for Civil, Women's or Workers' Rights, pro-peace/anti-war or purely solidarity against forms of oppression. With contributions from the likes of Pete Seeger, Paul Robeson and Woody Guthrie, and with songs such as We Shall Overcome, Joe Hill and Blowing In The Wind, it is likely that that the content on this particular CD will be the most familiar to most listeners, presenting as it does, so many singers and songs that helped to define a generation.

The second CD, Sacred Sounds presents selections which come mainly from North American religious communities, including Native, African, Latin and Asian Americans, but there are important examples too from the Buddhist, Christian, Jewish and Muslim faiths. Defined here as 'Any music that directs attention to the mystery of the spirit may be identified as sacred...', familiar songs, such as Swing Low Sweet Chariot and Amazing Grace are offered alongside lesser known recordings such as the shape-note and fuguing songs presented.

Disc 3, Social Songs & Gatherings, examines the role that music plays when we gather in a secular way. Often celebratory, the music here is an exploration the rich diversity of expression through the various stages of life, across different cultures, eras, and environments. Zydeco, Cajun, Norteño and Mardi Gras all feature on a wide-ranging, eclectic disc which will leave you breathless.

Finally, Global Movements, the 4th disc, features songs used in key political and social movements in countries around the globe. Thus we hear, for example, the anti-fascist Bella Ciao, originally based on a 19th-century folk song, sung during World War II, and Why We Need To Cry from the ?ód? Ghetto, alongside El Palomo which pays homage to the many "missing" political prisoners of the Pinochet era.

The power of song to not only mirror but actively shape the world we are in is captured to perfection in this collection, not only in terms of the music on the four discs themselves, but also in the superb accompanying, illustrated, 124 page booklet.

Not only are there five, erudite, short essays, written by Jeff Place, Huib Schippers, Anthony Seeger, D.A. Sonneborn and Deborah Wong, giving both a fascinating overview and a detailed, concise summary of each CD, but there are also extensive liner notes to contextualise each and every track, together with iconic images and suggestions for further listening and reading. Such is the attention to detail, that there is even a section on the evolution of the font used in the booklet.

The Social Power of Music collection is dedicated to the memory of R.C. Forney Jr., and was made possible by a generous gift from the Forney family. Its release, in February 2019, will accompany the 2019 Smithsonian Folklife Festival of the same theme.

This is an important and significant release, and the listener will be rewarded by finding inspiration in the profundity, sagacity and sheer enjoyment of the music and words offered, whilst at the same time hopefully being reminded of the words of Sara Dessen, 'Music is the great uniter. An incredible force. Something that people who differ on everything and anything can have in common.'